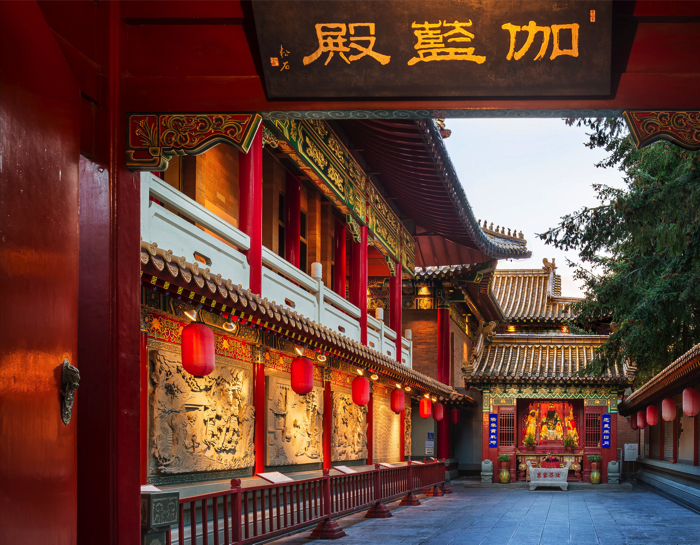 Buddhist temples usually have a statue of Garan Bodhisattva, a representation of Guan Yu (?160-220). For centuries, Chinese Buddhists have worshipped the general as a Garan deity and a Dharma protector. What scriptures or classics is this tradition based on?

According to Chapter 77 of the 14th-century historical novel Romance of the Three Kingdoms, after General Guan Yu was killed in battle by his rival Lu Meng, his spirit wandered among mountains and forests. At the time, on Yuquan Mountain there lived an old monk named Pu Jing. Having been an elder at Zhenguo Temple of Sishuiguan township, he had come here while travelling around the country, and seeing its stunning landscape, decided to settle on the mountainside by putting up a thatched hut for his daily routine of Chan cultivation.

One clear, moonlit night, the master was in deep meditation when all of a sudden he heard someone shouting down from the sky above, “Give me back my head!” He looked up to see a man riding a red hare horse and holding in hand a crescent-shaped sword, flanked by a white-faced general and a black-faced man growing a thick curly beard. As the three descended, General Guan, the one in the middle, bowed to the monk and enquired courteously, “My Teacher, who are you and what is your Dharma name?” He replied, “My Dharma name is Pu Jing. I’ve built a meditation cabin here for my Chan practice.” The general said, “Having just died in calamity, I would wish that My Teacher point a way to me out of confusion.”

Thereupon, the monk gave his teaching. “Do not cling to what is right and what is wrong anymore, as karmic reward and retribution does not come up short by one morsel. Now you’ve been slain by Lu Meng hollering ‘Give me back my head’, but in the past, you’ve stormed passes and butchered generals, including Yan Liang and Wen Chou. Whom should they claim their heads from?”

The general quickly saw the logic and made a vow to move to Yuquan, where he became a mountain guardian for the locals and the Dharma. The villagers, moved by his exceptional benefaction, built a temple on the peak and offered sacrifices in his worship all year round. Someone inscribed the following couplet on the temple that enshrined him,

With a red face signalling a red heart, riding a dashing red hare horse, while galloping he never forgot his duty to the Red Supreme Being.
Under a green lamp reading green history and holding a green dragon sword, in niceties he maintained a clear conscience against the blue welkin. (See Note 1)

And according to the Biography of Master Zhi Yi (538-597) of the Sui dynasty (581-618), one day, the master was sitting under a tree with knees bent in meditative concentration, when he heard someone enquiring in a loud voice, “Who is this Bhadanta? What is His Honour here for?” Getting up, the monk saw a mighty man and asked who it was. The man replied, “I am Guan Yu, and behind me is Guan Ping my son. Because of my loyalty and righteousness when I was alive, I have been named god of this mountain. I hereby ask the master for a teaching.”

An eminent monk who had attained awakening, the master knew at once that Guan Yu was still irate over having died at the hands of his rival in battle, and he went on, “General Guan, in the past you’ve beheaded such a large number of people. Why don’t you give them back their heads now?!” As well, he explained to him the principle of causality according to the Buddhist Dharma.

Being a righteous person, Guan Yu understood it instantaneously, feeling deeply ashamed and profoundly remorseful. The master granted him the refuge of the Buddhist Three Treasures on the spot, and further preached to him on expiating transcendence. Thus, Buddha’s grace enabled General Guan’s spirit to resolve its confusion, quell its grievance, and eventually escape suffering altogether to ascend to heaven.

Again, legend has it that later Guan Yu helped Master Zhi Yi build Yuquan Temple with divine power, and made a pledge to protect all Buddhist temples and the Dharma with their sangha. After that, Buddhists honoured the general as Garan Bodhisattva, with Garan being a term for temples where monastic Buddhists reside and practise.

Indeed, Guan Yu had been principled and loyal and acted with great devotion all his life, and in afterlife his spirit continued to roam and manifest itself in rescuing folks from peril. In addition to being a tutelary deity in Buddhism, for over a millennium even emperors chose to repeatedly confer honorary titles on him, making royal decrees extolling him as Sage and Supreme Being Guan among many imperial tributes and titular designations. The enshrined general, always sitting upright, is worshipped as an icon of righteousness and devotion, and reading the Spring and Autumn Annals by candlelight is an image of his deeply etched into the psyche of the populace. Undeniably, General Guan Yu is a folk hero most revered by the Chinese nation.

Note 1  In the first line of this couplet, a red heart is a metaphor for a single-minded, loyal person. The Red Supreme Being, also known as Red Emperor, could refer to any of the legendary, mythological early Chinese rulers in pre-dynastic times, e.g., Emperor Yan Di, Emperor Huang Di, Shen Nong the Devine Farmer, Emperor Yao or Zhu Rong the God of Fire. In the second line, reading green history over a green lamplight is a popular allusion meaning a dim oil lamp or candle light with greenish, blue flames over history books, signifying scholarly diligence, as in early society annals of history were once recorded on green bamboo strips. The green dragon sword is a crescent-shaped one General Guan is known to have typically been carrying with himself in battle, which has become an indelible part of the motif surrounding the folk idol. The blue welkin or heaven is here a reference to the traditional Chinese creed in a paramount judge who metes out ultimate justice.

The couplet attempts to summarize General Guan’s persona by using the contrasting colours of 赤 (red, crimson) and 青 (green, blue), a typical literary technique of forming a Chinese couplet, a verse of two delicate lines of equal length, made up of choice words with contrastive or complementary meanings, tones or imagery. Couplets retain a critical role in conventional Chinese Shi and Ci poems. In everyday life too, they still don households and other important buildings in Chinese and other Asian societies as well as their most popular festival, the Lunar New Year.