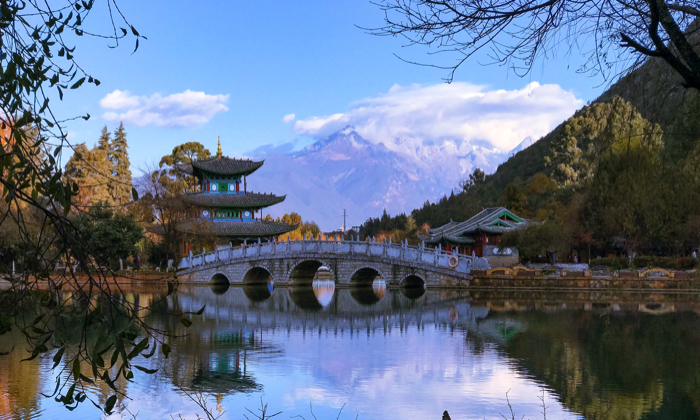 Chan Buddhism has had a lasting impact on Chinese literature, particularly with poetry. The two have an intimate relationship, to the extent that there is this saying, “Poetry is like Chan”, and the creation and appreciation of poetry is often compared to the cultivation of Chan.

On the surface, of course, poetry has nothing to do with Chan. One is a literary art, expressing emotions with concise, refined diction, the other part of a living religion that nurtures the human mind to transcend the world’s weariness. However, as both focus on implications beyond speech and language, emphasizing the importance of not sticking to the mere word, the shared commonality between the two has led to the practice of “employing Chan in deliberating poetry”.

Scholars routinely address the conceptive process of poetry in a typical introspective Chan fashion. The poet Su Shi (1037-1101) writes, “Reading fine poetry to while away a long night, I do queries of Chan with every good verse”, seemingly associating fine poetry with spiritual enlightenment, whereas Wu Ke (fl 11th-12th centuries), another poet of the Northern Song dynasty (960-1127), is even more direct, “Like doing Chan queries, in making poetry one must secure a gateway to enlightenment”. It illustrates how men of letters liken poetry to Chan.

In fact, Wu Ke once wrote a series of three poems entitled Poems about Learning Poetry, using Chan meditation as a thoughtful analogy. Here is the first of the three,

Learning poetry is rather like the learning of Chan.
A futon and cushion make one ignore when it all began.
Wait until one is skilled and masters it really well,
And then any verse made extempore will truly excel.

Learning to write poems involves an extended process of whole-hearted cultivation, just as a Chan monk must have perseverance to overcome all doubts as a prerequisite to being awakened. When they eventually arrive at enlightenment against confusion, however, the words they speak off hand are often detached and thought-provoking. The same is true of poets, for when they become expert in writing poetry, they create perfect lines that lyricize emotions fit for the circumstance without much deliberation.

Learning poetry is rather like the learning of Chan.
It is not enough to have in the head just one mind.
Jump out of the shackles laid down by the masters,
As indeed, the true man has an ambition that soars.

This poem emphasizes the importance of independent thinking on the part of the poet, just as the Chan monk is on guard against falling into the trap set by words. “The shackles” are a cozy nest one becomes habituated to, and they should always try to get out of them in developing their own distinct creation. And in practising Chan, the most important thing to do is for the monk to transcend stereotypical word-based thinking. Remember the Buddhist saying about innate truth, “Words break it and an active, non-true mind annihilates it.” Only by transcending one’s own conscious thinking could they hope to master a Chan discourse. In the same way, through the poet’s unique personal emotions and inherent temperament may flow lines of impeccable poetry.

And the third of the poems on learning poetry,

Learning poetry is rather like learning Chan.
How many couplets are ever perfectly done?
One earth-shaking line, though, is still read:
Spring grass flourishes in the pond.

Volume I of Surangama Sutra says, “Aspire to bring all sentient beings’ immeasurable merits to perfection.” Wu Ke regards the pursuance of perfection as the ultimate poetry creation, which entails the many poetic virtues such as consistency, spontaneity, all-in-one coherence and the elimination of excessive preoccupation. He then cites as an example the line “Spring grass flourishes in the pond” by Xie Lingyun (385-433), pointing out that it has reached something of aspired perfection and extolling it as “earth-shaking”.

For millennia countless poems have been written, but how many have survived as long lasting and immortal?! Just as numerous Chan monks have inhabited the land, and yet again, a relative few have consummated awakening. In this vein, the poet wonders how many perfect poetic couplets have ever been crafted. Just like all famously touching verses poets create, when Chan masters become enlightened and note down that which flows from their true mind, what they convey is, without doubt, truth about life.

The eminent monk Jing Cen (788-868) of the Tang dynasty (618-907), better known as Master Zhao Xian, was from Changsha, central China. On returning from travel one day, the temple’s supervising monk asked him, “Where have you been, Venerable?” The master said, “In the mountains.” “Where about in the mountains?” And he answered casually, “I left following fragrant grass, and I return trailing falling petals”, saying that he drifted away like meadow grass in the wind, and now comes back in the wake of flowers shedding petals. “What a spring buzz!” exclaimed the monk. In reply, the master leisurely chanted, “And even beating autumn dews dripping over blooming lotuses”, that is, even fall morning dews on lotuses may not compete with the spring effervescence he had been in.

Such exchanges are, of course, both poetic and laden with Chan, and from time to time they carry a subtle yet profound message. It happens that when monks are momentarily enlightened through the practice of Chan, the gathas they improvise and the words they utter ad lib often turn out to be latently rhapsodic.