A Milestone for the Dharma -- Notes on a visit to Vernon, BC 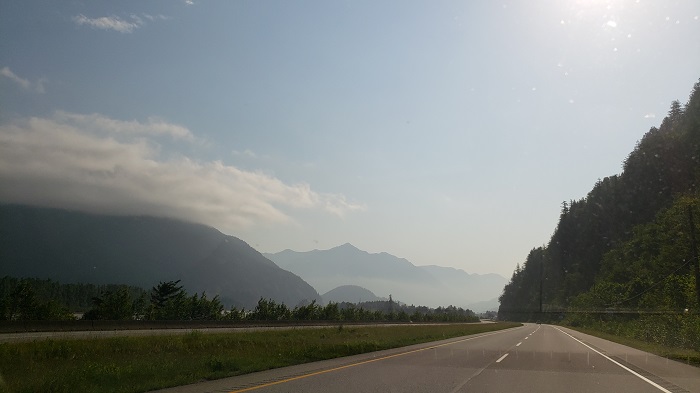 On the afternoon of June 16, 2019, Venerable Guan Cheng, abbot of the International Buddhism Temple, and four senior Buddhist priests, all of them his disciples, set off for the city of Vernon, BC. The weather was sunny and beautiful. Our car drove along a scenic road, crossing rolling fields, lush green plains and pine-filled valleys and mountain peaks. After 500 kilometres, we arrived.

On this visit Master Guan Cheng was going to talk about the Buddhist Dharma in a predominantly white community to people had not heard of it. It all started three months ago, when Mr Sherman Dahl, a father who had recently lost his daughter, came to the monastery for help from the master. He confided that his 18-year-old daughter was an athlete representing her school in competitions and was preparing to enter university, but sadly, this lively, bright girl had committed suicide because of depression. The huge blow threw the whole family into grief and pain, and as a parent, he blamed himself and was unable to extricate from it. During this period, however, he watched on YouTube the master’s Dharma teachings. Many of them taught how to handle mental stress and, finding them helpful, he decided to come to the Temple and ask the master whether he would go to Vernon to talk to local students and residents directly and answer their questions. There were students and parents in situations similar to his: they were living with so much stress and depression and could not free themselves.

Master Guan Cheng was moved by Mr Dahl’s sincerity, understood the issue, and accepted his request. As the master was then busy delivering Dharma lectures in Hong Kong at the time, the matter was handed over for Venerable Shan Ru to follow up. In the following two months, Sherman came for meetings at the Temple several times, as Venerable Shan Ru took five-hour trips to Vernon too to check things out in person. After the meetings, Sherman began organizing friends and like-minded people, students, parents, teachers and school principals. They quickly set about looking for a venue and designing a poster, getting the preparations in full swing. Soon, folks in Vernon were eagerly waiting for the arrival of the master.

At 8:30 am on June 17, accompanied by Sherman and a former principal, Mr Tom Watkinson, the master and his group arrived at Seaton Secondary School. According to Mr Watkinson, the students here had a unique situation with specific problems, and both their academic performance and personal emotions were unstable. It was hoped that the master would help the students think and put them onto a right path.

We came to a classroom holding a large group of students and teachers who had never been exposed to the Dharma. In just one hour how would we handle such a heavy topic? For all that, Venerable Guan Cheng, with much experience in communicating with different audiences, explained in simple terms the basic principles of causality, karma and reincarnation. Soon, the students and teachers in the audience had warm responses. They asked questions and discussed them with great interest, and the lecture ended in a lively atmosphere. Thanking the master for his presentation, the teachers said that when the students understand how emotions arise and can be brought under control it will be of great benefit to their life in future.

The How to Overcome Emotional Challenges lecture scheduled for 5-7 pm, June 17 at Schubert Centre was another highlight of our trip. By 4:30 pm, a large crowd had queued up. The audience came from all walks of life, most of it being young and middle-aged and some bringing kids and family. The more than 400 seats were instantly filled. 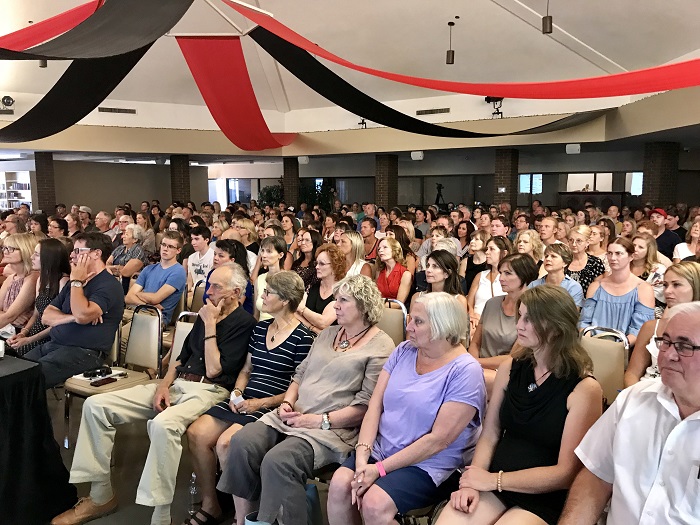 Although the master had dealt with similar subjects in the past, for this lecture he added a considerable amount of new content adapting to this specific audience. He cited modern science and contemporary medicine to explain the sources of human feelings and emotions, about how people get anxiety and depression, and what to do when they arise. In easy-to-understand language he introduced Buddhist principles and methods of cultivation, about karma and about how what we think, speak and otherwise do may affect it. The master avoided esoteric Buddhist terms in bringing the Dharma to life. Throughout the lecture this aroused keen interest in the audience, and many listened with full concentration while taking notes. As well, the lecture included a five-minute meditating session. It was already 7:30 pm when it wrapped up but many people did not want it to end.

We also noticed some touching anecdotes. At the entrance to Schubert Centre staff found a well-dressed boy holding money in hand. At 4:30 pm he was just hoping to get a ticket, but since all the admission tickets had been sold, the staff asked him to wait until the lecture had started to see if any seat was left. The boy waited patiently and finally got a seat. After the lecture, when he came to thank us we found out that he was one of the students who had heard Venerable Guan Cheng at Seaton Secondary School that morning. We hope Dharma seeds have been planted in his young heart.

For this three-day visit, Sherman had arranged for the master to speak almost non-stop, to groups large and small. On the morning of June 18, he went to another school, Fulton Secondary, to speak to the students and teachers there. And during lunch on both days, the master shared the Dharma with different people, among them a lawyer couple whose son had killed himself. After listening to the master, they were able to better deal with the stress and indeed looked much more relaxed. Finally, when it was time to say goodbye, everyone was reluctant to leave. They all told us how they appreciated the master’s visit, and that they wanted to go home to digest the teachings they had heard and practise them in their daily life.

The three-day journey was quickly over, but it sets a milestone in bringing the Dharma to communities in need of help. A monk born of Chinese ethnicity shared the Dharma with those never been exposed to it in a community of principally white people, and his audiences heard it enthusiastically. How rewarding! Venerable Guan Cheng has brought the Dharma to a whole new community and with compassion sowed seeds of Buddhism there. In time they will blossom and bear fruits.

When Bodhisattvas try to awaken sentient beings, they are mindful of the work, but not the gain. A poem by Master Hong Yi that I remember, about growing flowers, should be a fitting tribute in this regard,

I came to do the planting,

So I go before the flowers bloom.

For the colours of spring I miss,

That I leave to posterity. 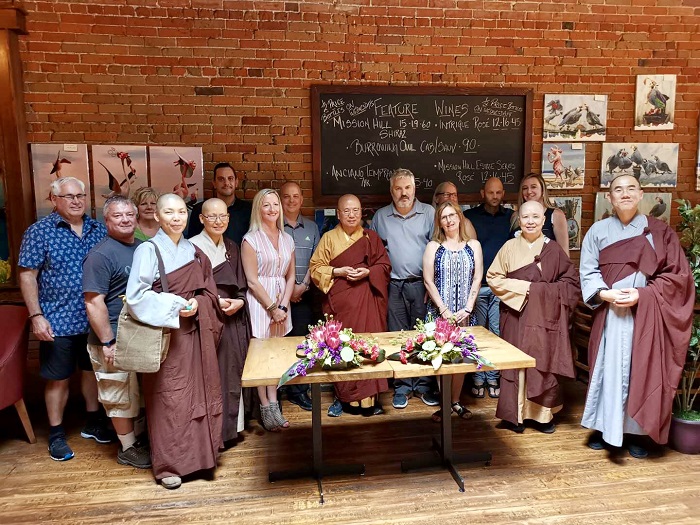