A Mind in Chanting Keeps Leisurely Company with White Clouds 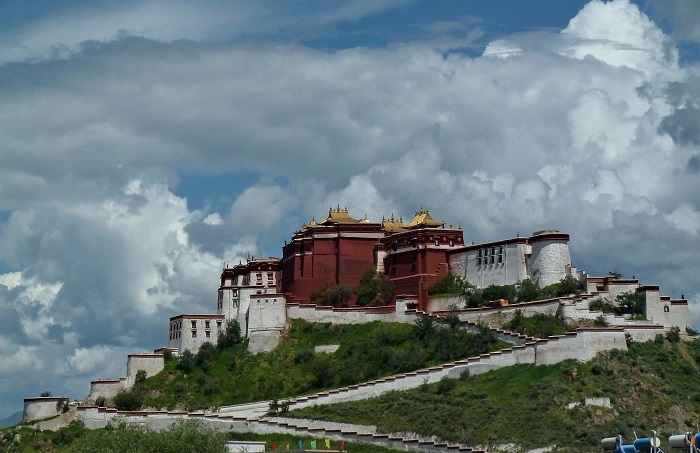 During the Song dynasty (960-1279), a lay Buddhist Shi Tianji in Yangzhou of eastern China focused on Pure Land in his practice. He chanted Buddha’s name ten thousand times a day every day, and yet his faith was less than firm, as he had doubts about the merit in reciting the Buddha’s name. One day, when he passed by the Temple of Patriarch Lü on Mount Huqiu, he caught a glimpse of the wooden pencil hanging from a beam in the hall with a tray of sand underneath, and sitting next to it was an elderly man writing planchettes for visitors. Shi had an instant urge then to request a planchette and clear his doubts through mediumship.

Planchettes have been used by Taoist followers to pray for divine revelation. When the requester devoutly prays to their deity, the writer, usually an old man or child, holds the two ends of a pencil. In a short while, the pencil tip starts to trace by itself words in the sand, which are often verses that resolve a perplexing puzzle. Buddhism does not actively promote planchette writing, nor does it reject it. In fact, planchette writing as a Taoist tradition has quite a unique significance. The realm of immortals and spirits in the Taoist community routinely use it as a medium to communicate with the lay, persuading good against evil, and it remains something remarkable.

On that day, it so happened that after Shi the lay gentleman signalled to the elderly man for a planchette, he put his palms together and, kneeling to the statue of Patriarch Lü, a legendary Taoist immortal, he pleaded, “Please, is there any merit in repeatedly chanting Buddha’s name?” The elder writer, while saying a mantra with his eyes closed, held both ends of a rod fixed to the pencil and laid it on the sand tray. Immediately, the pencil began to slowly zigzag, tracing a seven-character-per-line, eight-line poem, which had harmonious tonal and antithetical thematic arrangement. Its content was full of Chan and Pure Land, with a surprising flavour of mesmerizing spiritual freedom. The poem, titled “Gifted to Shi Tianji from Yangzhou, on a Query about Merit in Chanting Buddha’s Name”, ended with a signature of Pure Sunlight Taoist, a pen name Patriarch Lü went by. Here it is,

With chants, one hundred and eight times rosary beads turn.

Taking one beyond life and death are chants ending in sarira.

The saintly and the mortal, chants that end in Bodhi unlearn.

Not going with flowing water, a will to chant stays in serenity.

And a mind in chanting keeps white clouds leisurely company.

Chanting opens up magical wits for wisdom and spirituality.

And a chanting gatha I now leave to you for your scrutiny.

Readers not familiar with Taoism may not know who Patriarch Lü was. His full name was Lü Dongbin (796-1016), with Pure Sunlight Taoist as one of the pen names he was known for, and he served as a Taoist priest in late Tang (618-907). According to The Biographical Book of Patriarch Lü, when he was young, he failed two national civil service exams and went on the road to travel for pleasure. On the way, he somehow met one of the famed Taoist Eight Hermits, Han Zhongli, who legend says taught him formulae of alchemy, and he thus became a devout Taoist recluse practising in Mount Zhongnan. Because of his remarkable achievement, he was later named Fifth Patriarch of Quanzhen Taoist sect. He used compassion to help awaken the world as an approach to Taoist cultivation, and at the same time he replaced the study of swordsmanship with the elimination of greed, anger and delusion, thus leaving a significant impact over the subsequent development of Taoism during the Northern Song dynasty (960-1127).

Patriarch Lü was indeed the most enthusiastic of Taoists keen to recite Buddha’s name and probe Chan. Therefore, in the planchette verse gifted to Shi Tianji shown above, he says, “Pious chanting of Buddha’s name makes a Taoist elixir”. What is “elixir”? The Taoist pursuit of longevity is known for using the human body as a furnace and its vital energy as a medicinal base. Smelting of this inner energy is said to condense the spirit within the human body into a holy fetus. This Taoist process of cultivation, in essence, is called the alchemy to extract a pill for rejuvenation. Patriarch Lü in fact believed that reciting Buddha’s name with devotion is equivalent to Taoist alchemy.

“With chants, one hundred and eight times rosary beads turn.” When a practitioner chants Buddha’s name in succession, they keep squeezing the hundred and eight rosary beads in his hand one by one. Remember the Buddhist chanting approach takes faith, aspiration and action as the three requisites for rebirth with meritorious virtue. First, aspiration arises from faith, and it leads to action. If faith does not exist, neither aspiration nor action will follow. Those who devoutly recite Buddha’s name should have already established their faith and aspiration, and yet both should be followed with action to produce an effect. There are many ways to chant Buddha’s name, i.e., aloud, silently, with worship, with contemplation or while pinching the rosary beads. The poem here refers to chanting while pinching beads, meaning that every time one chants Namo Amitabha, their fingers twist one bead at a time to keep track of the number of chants done.

“Taking one beyond life and death are chants ending in sarira.” In Sanskrit, sarira refers to pearl-like objects found among the cremated remains of a Buddha or eminent monk, something as hard as diamond. Volume Four, Physical Sacrifices, of the Golden Light Sutra says, “Sarira, a result of cultivating vinaya, samadhi and prajna, is rather hard to obtain and an utmost blessing”. Patriarch Lü here is using sarira as a metaphor for an attainment of faith, aspiration and cultivation, reaching the state of an unruffled mind. Significantly, the body and mind of all sentient beings are klesa-based, i.e., the body has to go through the four stages of birth, ageing, sickness and death, and in terms of the mind, human thought, ideation and volition are all karma, which lead to reprisal and retribution with no end. That is why all sentient beings suffer awfully in the world of saha. If the practitioner chants Buddha’s name until they obtain an unruffled, dispassionate mind, they will escape life and death, transcend transmigration through the six pathways in the three realms of existence, and be reborn in the land of Amitabha, that is, the Land of Bliss.

“The saintly and the mortal, chants that end in Bodhi unlearn.” The Sanskrit word Bodhi means supreme enlightenment. All conditioned dharmas in the world are in separate, dualistic realms. For example, saintly and mortal, good and evil, cause and effect, right and wrong, love and hate, birth and demise are all delusional attachment on the part of the uninitiated. Bodhi, on the other hand, being indiscriminate wisdom, is truth not subject to language or thought. Therefore, the practitioner who recites Buddha’s name until awakening will transcend the realm striding over saintly and mortal.

“Not going with flowing water, a will to chant stays in serenity.” The mind of a mortal engenders incessant delusion and discrimination, with its ideation and volition usually within the confines of greed, anger and delusion. This is where mental affliction arises, leading to the making of karma and subsequent retribution. If one chants Buddha’s name until the mind is so tranquil that no delusion occurs with the circumstance, their consciousness will not drift along with the mundane world.

“And a mind in chanting keeps white clouds leisurely company.” If “Not going with flowing water, a will to chant stays in serenity”, then the chanting mind will naturally return to peace and tranquility without hinderance, like white clouds hanging over the top of a lone mountain top, and yet innocent, lofty and free to come and go. “Leisurely” here does not mean slacking or idle. It is a pure, unblemished realm of consciousness reached after diligently chanting Buddha’s name with a considerable amount of effort by the practitioner. One who devoutly recites Buddha’s name is akin to a leisurely mendicant described in Master Yong Jia’s (665-712) Song of Awakening, and in line with the Way, such a Buddhist is not bound by any hassle from the material world. Hence the epithet “leisurely”.

“Chanting opens up magical wits for wisdom and spirituality.” Religious chanting of Buddha’s name may uncover the key to enlightenment, and enable the practitioner to reach inconceivable wisdom. By uncovering the key, Taoism means gaining insight, and by enlightenment, Buddhism means seeing innate Buddhahood.

“And a chanting gatha I now leave to you for your scrutiny.” Patriarch Lü says this verse is for you to ponder the merit in reciting Buddha’s name. Legend has it that after Shi obtained this gatha, he became deeply convinced of the benefit in Buddha’s name chanting. From then on, he practised with more diligence and looked rather propitious when he passed away.

Hence, we get a revelation from this poem that planchette writing could serve as an incredibly beneficial approach. Master Yin Guang (1861-1940), a modern monk, says, “This approach should not be rejected, nor should it be praised”. Why should it not be praised? Crucially, many of the things happen with planchettes because spirits and ghosts pretend to be saints in the immortal world, and what they claim to be Buddhist teachings can be entirely speculation and fabrication. If praised, it could be used to sinfully jeopardize the Dharma in misleading sentient beings. On the other hand, why should it not be rejected? Well, remember that many of the messages written through a planchette actually promote karmic retribution, warn of evil, punish the wicked and persuade doing good, which helps maintain a society’s morality. If rejected, it would be a blunder to hinder people from doing good against evil.

Having come down to us from Patriarch Lü in the Song dynasty, this planchette poem, with its fine rhyme scheme and coupling arrangement, reads much like an ancient seven-character per line, eight-line poem. It is not only easy to memorize and recite, but is rich in Chan connotation and well in sync with the tenets of Pure Land Buddhism. For this reason, many a fellow Buddhist keeps it as their motto.