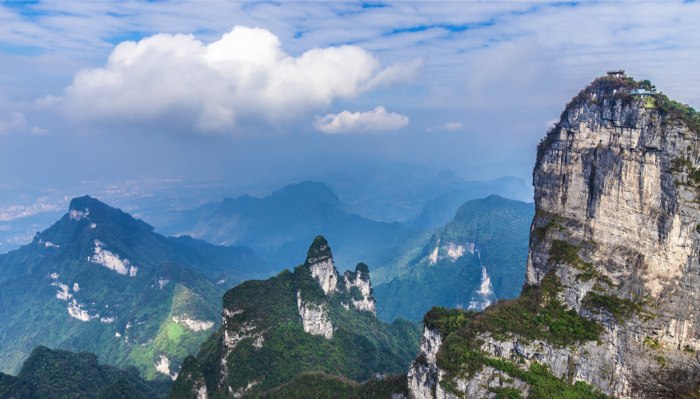 Hanshan Zi, a celebrated Buddhist monk poet, lived during the Zhenguan reign of the Tang dynasty (618-907), but how he lived remains largely a mystery. His real name, place of origin and dates of birth and death, for example, are all unknown. For all we know, in early years he was once a government official, but the ups and downs of the civil service career possibly being too much for him, he took to the road on random tours. Later, somewhere on Tiantai Mountain in eastern China, he decided to settle as a recluse in a cave of Shifeng county. The place, cold and secluded, was named Hanyan, meaning cold crag, and he became known as Hanshan Zi, literally “one from the Cold Mountain”.

Hanshan Zi was said to be fond of reciting poems and composing them. As soon as he had created one, he would write it on rocks or trees. And he was close friends with Shide (fl 9th century), another monk poet, at Guoqing Temple in Taizhou. Most of Hanshan Zi’s poetry we know of today uses Buddhist thinking to explore the true meaning of life, and all of the more than 300 pieces in existence brim with Chan. Many, depicting invariably a life of solitude among mountains and woods, come across as refreshing and original in both intent and imagery. Here is a piece on White Clouds, to share with you,

On a trail up the Cold Mountain,
The way ahead looks never ending.
Loose rocks pack a creek unfolding.
Blurry grass fills the ravine open.
Moss slippery with no rain, heavy or light.
Pines that sough have not a wind blowing.
Who could beat the world’s wearying,
To together sit amongst clouds white?

In the first four lines, the poet says that the Cold Mountain path goes far and deep, and as long as you are willing to make a move on upwards, you will find that the roads here have no end. Water flows in the long, wide valley, with meandering brooks full of stone debris. A waterfall in the gorge is tall and rapid, and in the broad ravine also grows grass in a misty lush. These few lines are something of an analogy to the challenges someone practising Buddhism would face on their lengthy journey. The many rocks, slippery moss and thick misty grass serve as a metaphor for obstacles to their arduous path of cultivation.  While there are countless ways to nurture Buddhahood, as long as one takes one approach and delves into it with perseverance, achievement can follow. By that time, one may well admire all the natural beauty involving cold mountains, paths and trails, ridges and valleys, streams and moraines, and emerald green grass.

The next four lines of the poem go on to reflect Hanshan Zi’s artistic grace. The moss makes the road slippery, due likely to the heavy fog sitting in the sheltered valley, and not caused by a rainfall. Similarly, waves of the pines soughing are not by reason of a gust, but because their leaves and branches are apparently so densely packed that they somehow make beautiful music while leaning upon each other. Under the circumstance, in such a moment, wonders the poet, who might go beyond the worldly hustle and bustle, come to the Cold Mountain and unwind in his company?

The poem, full of Chan wisdom, speaks of what Hanshan Zi likely attained through meditation, bringing the reader into a purely spiritual, ethereal world. Who else might better appreciate the appeal of such an undisturbed natural milieu, while having immense joy amidst the white clouds?

The poem describes sceneries on the Cold Mountain, which require one to climb and discover for themselves. More importantly, to do so one must first understand the truth in the saying, “This world is wearisome”. If a person were not exhausted by the goings on in everyday life, they would not move to settle in, say, the Cold Mountain. And if no one were to climb the mountain, then no one would have discovered its absolute beauty. Anyone who could rise above the wearying mundane world, that is, not burdened by any human desire for wealth, fame, food, sex or even sleep, nor by sensory perception in the form of colour, sound, scent, taste, and sensations through touch, would have the felicity to transcend the time and space of a wearisome human society, and leisure to relocate to the Cold Mountain and sit amongst white clouds together with the poet monk Hanshan Zi.