Buddhism: A Religion or Philosophy? 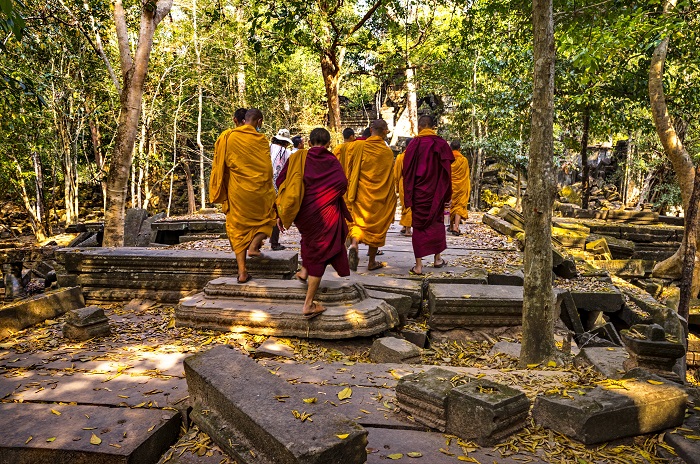 Friends wonder whether Buddhism is a religion or a philosophy. On this issue, as a matter of fact, scholars disagree as well: Thome Fang, a philosopher professor, said it is both, but Ouyang Jingwu, a consciousness-only theory expert, said it is neither.

Religion works on the basis of faith whereas philosophy relies on rational analysis. Strictly speaking, faith being subjective, it would be more objective to accept something faith-based through understanding it. Therefore, Buddha encourages practitioners to use their reasoning ability to understand the reality of the Dharmas in addition to their sincere beliefs and earnest practices. On faith and understanding, the Zen master Yongming Yanshou (905-974) had this to say, “Faith without understanding increases ignorance. Understanding without faith increases deviation.” Faith and understanding, like two wings of a bird, are neither of them dispensable. Thus we say that Buddhism is both a religion and a philosophy.

Some people stop short on hearing the word philosophy. Thinking it is too profound to make sense, they say that in today’s material world, once we have science, we are able to handle the world’s production. So why deal with something as mysterious as philosophy?!

Ladies and gentlemen, philosophy helps us understand universal laws and improves our spiritual wellbeing. We must know that human civilization begins with thinking, and there is philosophy as long as there is reasoning.

In fact, the word “philosophy” is derived from ancient Greek culture. Philo is “love” or “pursuit” and Sophie is “wisdom”. Philosophy is a pursuit of wisdom in the process of human civilization. Buddhists must not only seek wisdom in life, but also explore the source of that wisdom, in order to attain the prajna about the true nature of all things.

What, then, is philosophy? Philosophy is a study of the laws of human society and human thinking, of human life and their outlook on the universe. It deals with practical questions regarding life such as, What abilities do humans use to understand the world? What standard should be used to judge the truth? What is being true? What is being false? From a quantitative perspective, is the universe one dimensional or multi-dimensional? Would a qualitative perspective be idealistic or materialistic? How did the universe form itself and how does it develop?

In addition to knowing the universe, humans must also implement what they know. In doing so they go from knowledge to ethics. An ethical view in philosophy thus discusses the meaning of morality. At the same time, the three-fold discipline of a Buddhist, namely vinaya, samadhi and prajna includes training in moral ethics in the first two and philosophy in the last one. In other words, Buddhist training in moral ethics and philosophy covers an understanding of human life and the universe.

Buddhist principles are generally discussed in terms of circumstance, action and consequence. Circumstance is the object of observation, cognition, research and analysis. Action is the process of practice, the acting out of the philosophical concepts understood in one’s thoughts and behaviour. And consequence is the result of practice, that is, from a theory of knowledge moving on to a theory of ethics. After that, one leaves the common world as we know it to enter holy land, with access to the ultimate truth of the cosmos, and attain the laws of all Dharmas.

Buddhist literature expounds the subtle karmic relationship between man and universe, all the way up to the causal relationships among all beings throughout their lives past, present and future. The philosophical content involved in these sacred writings, immense and ineffable, summarizes these important branches of knowledge in terms of Western philosophy: epistemology, cosmology , ethics and value theory.

What is epistemology in Buddhism? Epistemology is a study of laws regarding human thoughts and the existence of all things. For example, the causality law that explains the relationships of all things in Buddhist thinking, the causal chain of twelve elements of Hinayana Buddhism, the Four Noble Truths and Noble Eightfold Path as well as other principles, such as the theory of consciousness only without external reality of the Mahayana eponym school, the principle of dependent origination according to the Three Treatise School, the three thousand forms and functions within one single thought according to Tiantai School, the emptiness of all five aggregates as explained in the Heart Sutra, or the principle that all form is illusion and seeing this illusion is seeing tathagata, as explicated in the Diamond Sutra. Without doubt, using epistemology to explore and practice, Buddhist cultivators will eventually start on the road to becoming a Buddha.

Using the concept of space to analyze the entity of the universe, Buddhist theories of real mark or reality include the existence of Dharma theory, empty Dharma theory, existence-emptiness theory of the Middle Way, theory of all emptiness no form, and theory of reality of all Dharmas.

Ladies and gentlemen, philosophy is closely related to human life, and exploring wisdom and its source cultivates a keen spirit and a fertile mind, creating a harmonious dynamic between matter and spirit so they evolve side by side with reason and conscience. If we could use a standard of truth, virtue and beauty to measure worldly laws, then philosophy combines truth in scientific knowledge, virtue in ethics and morality, and beauty in artistic life in addition to holiness in faith, not to mention Buddhist philosophy, which is beyond the laws of the world.

Indeed, Buddhist philosophy is a huge repository of ideas for human civilization. The wisdom and academism contained in it are vast and profound. The average person, though, tends to understand Buddhism and practise it from a mere perspective of religious faith, and pays more attention to matters of ceremony and ritual, such as worshipping, chanting, incense offering, meditation, and prayer and repentance, and far less to understanding it from a philosophical perspective. Surely, any benefit they reap by following Buddhism in this fashion is scrappy and far from comprehensive.