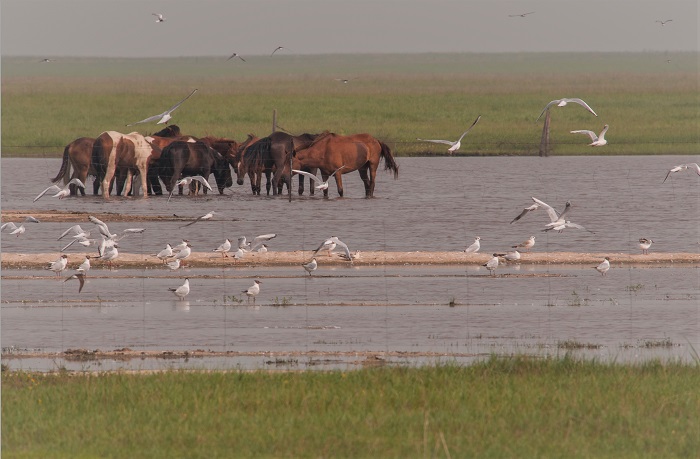 The pastoral lyric from the Tang dynasty (618–907) is known for portraying simple, rustic life and nature. It reminds people of the kind of leisure, harmony and innocence in life once possible. Furthermore, because of its frequent depictions of shifts of the sun and moon and cyclical change of seasons, it would help the reader appreciate the meaning of impermanence and how it connects to human experience. “Dawn in Spring” by Meng Haoran  (689～740) is a well-known example:

I woke up to a spring morning,

To hear, far and near, birds trilling.

With a storm raging overnight,

How many flowers fell off? I wonder.

“I woke up to a spring  morning,/ To hear, far and near, birds trilling.” Waking up from a sweet spring-time sleep, you hear birds chirping in trees all around. Here, spring symbolizes a colourful, beautiful life. Those who dream in spring may not detect the approach of dawn.

Dreams are part of life, but to Buddhists they have a special meaning.  The Diamond Sutra says, “All that arises with karma is like dreams, bubbles, dewdrops or lightning. Indeed, it should all be viewed as such”. This means a practitioner should see all things in the world are continually changing.  All phenomena are fleeting and short-lived.  They are like a dream.  One of the fundamental tenets of Buddhism is that all phenomena arise from causes and cease from causes.  This is known as “all dharmas dependently arise”. All things thus arisen have no independence, nor control, nor constant physicality, intrinsic existence or real self. This aspect is known as śūnyatā, that is “all dharmas are empty in nature.”  This piece of wisdom and true realization of existence is referred to as “condition arising and emptiness of nature”. Hence, everything that begins and ends from causes, whilst seemingly real and vivid to the eye, is illusory in essence, like dreams, bubbles, dewdrops or lightning.

An ordinary human being in the Three Realms (i.e., desire, form, and formlessness), fails to personally realize the true meaning of existence, of condition arising and emptiness of nature, and thus is said to be living in a dream.  In our mundane life, all of us busy pursuing fame and fortune, carnal pleasures, and even food and sleep.  We all live in dreams.  Only the Buddha is the awaken one.

Legend has it that Lu Chunyang (796-1016),  a Taoist living over 1,000 years ago, started his cultivation all because of one dream he had. Once, in his youth, he left home for a nation-wide examination to become a civil servant, and on his way stayed at an inn in the city of Handan. While waiting for his meal, a golden millet soup, he fell asleep and had a dream. In the dream, having achieved the top spot among all the examinees he became a successful government official, first as head of a county, and then all the way to prime minister heading the cabinet. In the meantime, he married, had a wife and children and then grandchildren. His career was smooth and he lived a prosperous, happy life. However, just at a high point in his career,  he was suddenly demoted because of involvement in a crime, his family broke up and he was sent to live a wretched life in a remote place all alone, until dying in his eighties. Just in an instance, he experienced the joys and sorrows in life.  All the wealth, comfort, power and glory were transient. Just as his life was expiring in the dream, he was woken by an attendant bringing him his porridge. The story is known as the Dream of Golden Millet, in which one’s entire life lasted but a flash in time.

Lu Chunyang’s dream woke him up to a lesson that no career lasts forever no matter how distinguished, no family is worth unceasing affection no matter how perfect, and all fame and fortune is nothing but fantasy. With that realization he focused himself on spiritual awakening and blazed a new path in life. His experience is similar to waking up in spring, rendered in the poem quoted above, hearing the birds’ joyous twittering everywhere that expresses bursting vitality and sings a symphony of awakening from dreams.

“With a storm raging overnight,/ How many flowers fell off? I wonder.” As one wakes up, they could then proceed to cultivating spirituality through meditation and action, consolidating their incipient awakening to insight of the Dharma, and accepting that nothing really arises or perishes, in order to become free and unrestrained from all shackles. The practitioner, realizing the Zen practiced last night and the wisdom present with him, now sees their worldly suffering and conceptual hindrances disappear like flower petals and leaves falling off trees in a storm. And who will care to count how much?

Spiritual friends, the journey to Buddhahood is through taking care of your cultivation with perseverance and having harvest take care of itself. One day, just as the “Advice to Learn” chapter in the book Xunzi rightly says, if one focuses their efforts long enough, over the course of time they will have genuine access for sure.