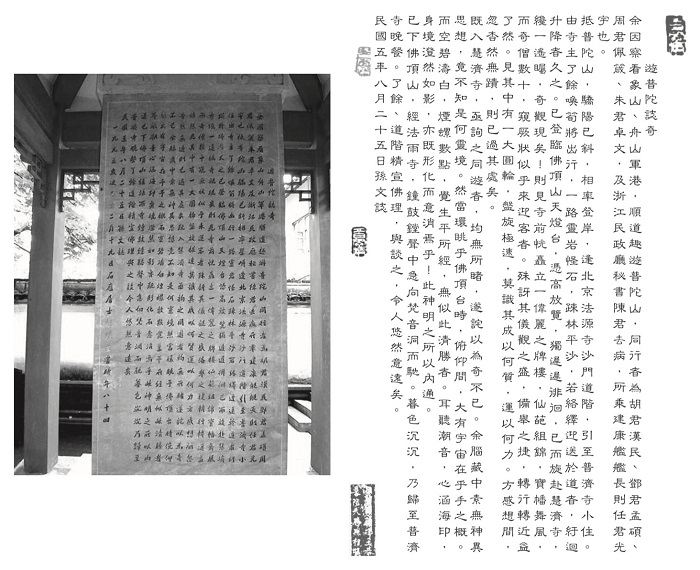 Dr Sun Yat-sen (1866-1925), leader of the 1911 Revolution, is the founding father of modern China. He once visited the sacred Mount Putuo and witnessed something sublimely providential with his own eyes. That experience he recorded in his “Notes of Fortuity on A Putuo Tour”.

On August 25, 1916, after inspecting the military ports of Zhoushan and Xiangshan, Dr Sun went on a pilgrimage to Mount Putuo with his entourage. Along the way, he saw the vastness of water and sky around an island filled with strange crags, steep caves and verdant foliage. The sights included the Sound of Waves Cave, Sound of Bodhi Cave, Crystal Palace, A Thousand-step Hill and Hermit’s Well, which were all breathtaking and spellbinding.

Upon arrival at Mount Putuo, Dr Sun and his party took a short break before ascending the peak, known as the Buddha’s Cape in Sea and Heaven. On the summit to their left, they saw an ancient Huiji Temple. Here, he enjoyed the scenery shrouded in misty sunset and his heart was filled with indescribable joy. In an instant, a holy scene presented itself in front of him. He wrote about it in “Notes of Fortuity on A Putuo Tour”:

“When I looked into the distance a spectacle emerged. Suddenly, a magnificent arch had risen in front of the temple, like something in fairyland, with splendid banners fluttering in the wind. A dozen monks with a dignified aura seemed as if they had come out to greet us. They all looked gallant and stately, and their movement solemn yet agile. In the middle of the front row was a giant wheel spinning rapidly non-stop. How could such an immense wheel rotate so fast in the air? Just as I was wondering, all of a sudden, the wheel disappeared, together with the arch and mysterious monks, which rather amazed me. When I enquired about it with my companions later, they turned out to have seen nothing at all. As a rule, I never entertain magical thoughts in my mind, nor do I know what a spiritual realm would be like. Yet here, as I looked around the Buddha’s Peak Terrace amongst crags and trails, a unique emotion swelled within me as though the entire universe were in thrall to me. Watching the sea of ​​clouds and hearing the incoming tide, I felt that none of what I experienced in life had ever been so pure and amazing.”

Gentle readers, after this journey, Dr Sun Yat-sen wrote “Notes of Fortuity on A Putuo Tour” to document the emotions triggered in him. All of the scenes, events and feelings were real to him. While on the sacred mountain, because of certain unique karma with Buddha, this revolutionary leader observed a stunning divine scene never experienced before. Some may assume that these were merely mirages or illusions of scenic landscape that Buddha’s light had shone upon. Why, then, among the dozen or so sight-seers on the same tour, did no one else witness them? The appearance of a sublime spectacle was indeed incredible.

And last year, I went on a trip at the invitation of Wanxia Temple in Xinxing, Guangdong province of southern China and hometown of Master Hui Neng, Sixth Patriarch of Chan Buddhism. While there, I hosted consecration for a Buddha statue to complete the temple’s renovation and also an opportunity to extend our network of good affiliation. After the worship, I reflected upon Hui Neng’s masterly words and deeds.

Hui Neng (638-713) was born in Xinzhou (presently Xinxing) during the Zhenguan era of the Tang dynasty (618-907). He followed Hong Ren (601-674) as his disciple and eventually passed away at Guo’en Temple in Xinzhou. His work the Dharma Treasure Altar Sutra has become a historical masterpiece for studying Buddhism history, intellectual thought and Chinese as well as world philosophy. Like Laozi (604-531 BC), Confucius (551-479 BC) and Mencius (372-289 BC), he is considered a great thinker in the hall of Chinese culture. And Xinxing, where the intellectual giant was born and buried, has sufficient reason to be proud.

A profound influence from Buddhism

Back to Dr Sun. In October 1924, prior to launching the Northern Expedition, he led a small travel party on a tour to Nanhua Temple, an ancient temple in Guangdong and home monastery to Hui Neng, the same Sixth Patriarch of Chan who founded its southern China offshoot. At a meal during the visit, Dr Sun discussed this famed Chan offshoot with his companions and asked if they knew about the robe and bowl, the key ceremonial proof of a Buddhist lineage, passed down to the master from his predecessor. His secretary Tian Huan replied, “There are historically two bowls passed down by the Buddhist followers all along through lineage, one in India and one here at Nanhua.” Upon that, Dr Sun asked the abbot to bring out the bowl kept at the monastery for verification. As well, he took the opportunity to share these weighty words with all present, “You should heed this. Buddhism advocates equality, fraternity, compassion, and philanthropy. Our goals are the same.”

Thus, to sum up, Dr Sun Yat-sen maintained a subtle connection with Buddhism, with his ideal of Great Unity profoundly influenced by Buddhist doctrine. Indeed, to some extent, his revolutionary practice could very well have been motivated by the spiritual realm in Buddhism.

The sublime divinity that our founding father personally witnessed and wrote about may even make non-believers of Buddhism stand in awe, lending them confidence. To believers, it further consolidates their conviction.

After I inspected the Xiangshan and Zhoushan military ports, on the way back we visited Mount Putuo, accompanied by Messrs Hu Hanmin, Deng Mengshuo, Zhou Peizhen, Zhu Zhuozhang, and Chen Qubing, secretary of Zhejiang Provincial Civil Affairs Department. The boat we took was MS Jiankang with Mr Ren Guangyu as captain. On arriving at the mountain, the bright sun was slanting as we disembarked and were greeted by Dao Jie, a monk originally from Fayuan Temple in Beijing. He took us to Puji Temple for a brief stay, where we were hosted by abbot Liao Yu. As we went back on the road, all along the way there were strange crags, sparse trees and sandy beaches, as if greeting us and seeing us off up and down for quite a while. Then we ascended the Buddha’s Peak for an unimpeded view into the distance from the Sky Lamp Terrace, and I took a stroll and lingered by myself. Soon, down we went towards Huiji Temple. One mere look afar and a spectacle there presented itself. In front of the temple seemed to stand an imposing arch adorned with beautiful flowers and splendid embroidery, with magnificent banners flapping in the wind. And a dozen striking-looking monks came up as if to welcome the guests! I was stunned by the grand ritual performed at such short notice. And the closer we approached, the better details we saw. Amidst them all was a large round wheel circling swiftly. And just as I wondered and was exclaiming what it was made of and how come it was spinning so fast, suddenly everything disappeared leaving not a single trace, just as we went past them all.

When we entered Huiji Temple, I repeatedly asked fellow travellers about it, and I was rather surprised no one had seen anything. As a rule, I never entertain magical thoughts in my mind, nor do I know what a spiritual realm would be like. However, when I had looked around at the Buddha’s Peak, it seemed as though the entire universe were in thrall to me! And with the blue void, whitecaps and verdant hills, nothing I ever experienced had been so captivatingly pure. Hearing the sound of Bodhi with a mind pursuing samadhi in the sea of wisdom, one’s world was lucid like a shadow, transcending both body and mind. Alas! This must be how the divine reaches one’s innermost.

Soon, on our descent from the peak we passed by Fayu Temple, whose sound of bells, drums, chimes and tolls accompanied us on our rush to the Sound of Bodhi Cave. When dusk was finally behind us, we returned to Puji Temple for dinner. Liao Yu the abbot and Monk Dao Jie were so erudite in Buddhist tenets that conversing with them was both liberating and mesmerizing.