Eagle Claws in the Snow 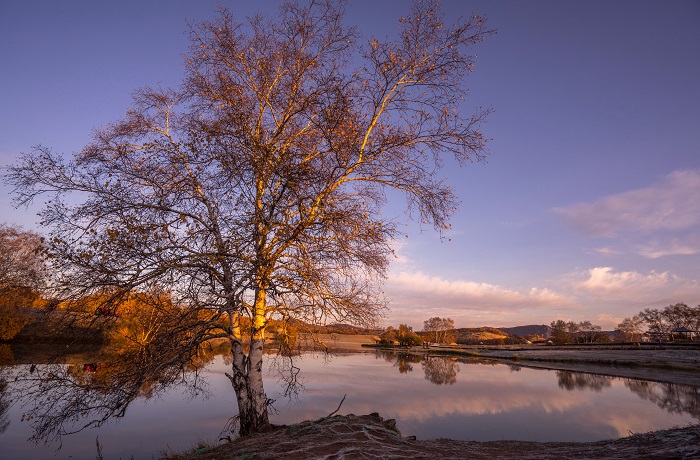 Together with a bright moon in flight.

The hill is cold, yet the moon and clouds tender.

All the tranquility here needs no abiding support.

As some affectionate white clouds float by the meditation hut, a nostalgic moon appears in view all of a sudden. While the vast mountains seem quiet and cold, with the accompanying moon and clouds, they merge into one. Right away, an enchanted, serene mind emerges, one that calls for no otherwise careful cultivation.

This poem, one of his “Miscellaneous Chants from Living in the Mountains”, was written in the 1970s by Master Yun Wai (1934-1982) of Hong Kong. The master was not only proficient in preaching, but also skilled at poetry and painting. His poems about mountain dwelling are typically simple, serene and full of Zen, enabling the reader to feel spiritually detached and uplifted above worldly considerations. He used to reside in the secluded On Yeung Vihara and Po Lin Monastery, so most of the poetry in his collection Eagle Claws in the Snow came from the scenic wilderness around Castle Peak and Lantau, where his mountain residences were located.

With gentle breeze, white clouds and a bright moon, the wilderness inevitably formed an indissoluble bond with the mountain dweller. In the period the master had a home there, he often made use of white clouds and scenic mountains in depicting the Zen felt with permeating leisure and tranquility.

Leading to the mountain temple in the wild, a trail zigzags.

A monk takes up residence deep amidst white clouds.

To the unlatched firewood door nobody comes.

While busy preaching the Dharma, the master used to get together with members of his congregation and socialize, yet he did not denigrate himself by getting involved in the hurly burly of worldly affairs:

To get to Yangzhou I never know a pathway.

Nor ask me how many there are to the city.

Now that my travel sandals are put away,

In store is a desolate winter with mountain serenity.

“To get to Yangzhou I never know a pathway. / Nor ask me how many there are to the city.” Yangzhou, a thriving metropolis in eastern China, is a trope for the bustling, prosperous world. Pursuing fame and fortune non-stop, mortals are addicted to physical pleasures and material comfort. But being beyond worldly concerns, the monk has no interest in worldly affairs whatsoever.

“Now that my travel sandals are put away, / In store is a desolate winter with mountain serenity.” Winter is here and his sacking loafers are in storage, meaning the monastic will not travel for visits or preaching for some time. Instead, he will now concentrate on unperturbed personal wintertime cultivation in the quietly charming mountains.

With the New Year’s Eve around the corner, what is left of the year will disappear soon, and a new year will begin again. The monk now needs to reflect on the Dharma work he did over the year, when all along he has been benefiting from the donors’ alms. He feels, in fact, uneasy how he is going to pay back when all the donations he has lived on are tallied.

Tonight, how do I send off the yesteryear,

With a balance of what is owed to patrons?

Being no good at making bread and butter,

It is hard, by tomorrow, to settle the accounts.

During an annual three-month summer retreat, as a Buddhist tradition, monastics reflect on whether their thoughts and behavior have been in accordance with the Dharma, and when the retreat comes to an end, they declare to the sangha all the offences they have committed, and pledge to make repentance. In Sanskrit this is known as Pravarana, meaning “fulfillment of a wish”. As a matter of fact, monastics need not wait for the summer retreat to make amends, as self-examination is part of their on-going daily cultivation. In Master Yun Wai’s verses, there is plenty of self-mockery and atonement, being a good indication of his diligence and humility. Here is another of his “Miscellaneous Chants from Living in the Mountains” that conveys this sentiment,

I, a dweller, know not the joy of mountain living,

At first I was a new face, being a monk travelling.

Querying Dead Wood but not getting a message perfect,

I would sleep in with clothes on till the sun was up.

Having eaten alms rice from many a donor’s support,

Have I, by now, paid back for even half a cup?!

“I, a dweller, know not the joy of mountain living, / Having, alas, for twenty-eight years resided here.” For all these years and decades, the monk has lived in Po Lin Monastery, Lantau and On Yeung Vihara, Castle Peak, yet he is humbled that he has not been sufficiently diligent in his practice and hence wasted a considerable amount of time.

“At first I was a new face, being a monk travelling. / An ageing monastic talked about landscape familiar.” When he first arrived, the poet, a new monk, was unfamiliar with the rules of the “jungle”, a reference to the Buddhist community. Thankfully, an elderly monk shared with him the customs and practices at the mountain temple. The type of Zen he was pursuing, however, was that of what is called Dead Wood, a technique that focuses on non-understanding, whereas an understanding of the Dharma is thought by many to be the first vital phrase in a Buddhist’s cultivation. Sometimes he would read the scriptures until late at night, and not get up the next morning when the sun is shining, and thus, “Querying Dead Wood but not getting a message perfect, / I would sleep in with clothes on till the sun was up”.

Master Yun Wai was a practitioner who had a rather strict demand for his self-cultivation. Not only did he often reflect on and confess to his own failings, he constantly encouraged himself to do his best as a sangha member, to improve his personal practice, and promote the Dharma for the benefit of all sentient beings. He therefore laughs at himself, “Having eaten alms rice from many a donor’s support, / Have I, by now, paid back for even half a cup?!” Every day I consume rice provided by patrons, but have I done my utmost to promote the Dharma and return the merit to the charitable donors?

The master’s eloquence at preaching and debate was well known, and in addition, he was adept at poetry, calligraphy and painting. Consequently, many in his audiences were amazed by his talent, inquiring about his background, such as age and home temple, to which he would not give a response. While at On Yeung Vihara in Castle Peak, he wrote lines addressing his thoughts,

Any place could be home if one goes with karma.

Please, ask not my age now that we meet.

I wish you cherish what there is now and here.

There be nothing short of a glowing spring-time sunset.

Monks travel and preach, calling it home anywhere they go. A slight illusion could unnecessarily entangle them in worldly affairs, and that is the reason why they routinely have no mundane chitchats. It follows that “Any place could be home if one goes with karma. / Please, ask not my age now that we meet”.

“I wish you cherish what there is now and here. / There be nothing short of a glowing spring-time sunset.” As The Diamond Sutra says, “The past mind is not available, the present mind is not available, and the future mind is not available.” One’s years will pass as time goes by, and so why be emotionally fixed on things bygone? Whether suffering or joy, what is gone is gone. Do not feel bitter about one’s suffering in the present, nor miss the joy he had in the past, because what is of the utmost importance presently is one’s current practice. If one tries his hardest right now, he will naturally thrive tomorrow, like a warm spring interacting with the glows of a glorious sunset.

“Once spoken, intents of the mind become poetry,” as an ancient saying goes. The “Miscellaneous Chants from Living in the Mountains” contained in Eagle Claws in the Snow are not only elegantly composed but unpretentiously transcendental, as they embody both the diligence and dedication of an eminent Dharma proponent, something one never gets weary of perusing.