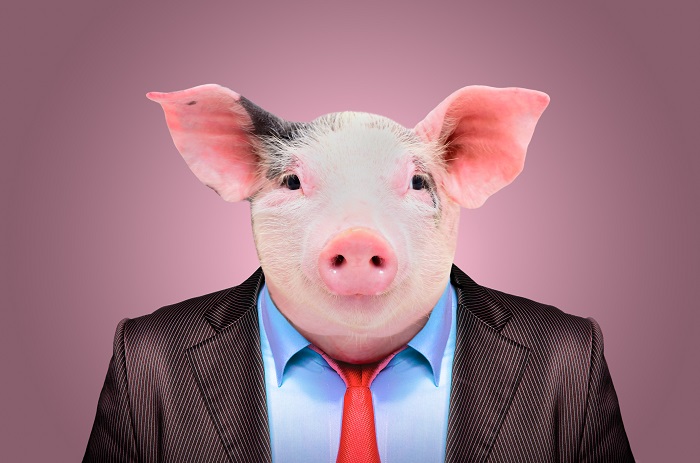 A pig trotter for a hand

Weng P’o-hui, a lay Buddhist, routinely had his left hand wrapped in cloth, using his right hand only when eating. Once, when the master attended a Great Compassion Repentance ceremony at Shihp’u Temple and had a meal sitting next to Weng, he accidentally bumped into Weng’s arm so the cloth wrapping his left hand dropped. Master Jo Yu was shocked to find that his left hand was in fact a pig’s hoof. At the time, Weng motioned to him for silence and after the meal, he invited the master to a quiet place and explained all.

“Let me confess, Master, that my left hand is indeed not a human hand, but a pig’s trotter. In all honesty, this pig’s trotter was brought by the bad karma that I had made in my previous life, and it’s all a matter of karmic retribution.”

Saying that, the gentleman took off the cloth wrapper, and his left hand turned out to be a complete front left pig hoof, with even a few sparse pig hairs on it still visible.

Weng went on. “I remembered things that had happened in my former life when I was born. I had been a pig and was to be reborn as a pig again upon death. Fortunately, at the very last minute I woke up and was reincarnated into a human, and yet with my left hand still as a pig’s trotter. In my life previous to that as a pig, I had been an ageing poor scholar having to borrow money all the time just to survive, until finally I died of illness. Not long after, I left the death bed in featherweight and floated past a village when my body suddenly felt chilled. I saw a house with its door open and walked in. No one was there but a few black coats hanging in the hall. At that time, because it was freezing and I could hardly cope, it occurred to me to steal one. Thus, while no one was watching I quickly grabbed an overcoat and donned it. It immediately made me feel warm and cozy. Sitting with my back against the wall I soon fell asleep. I didn’t know how long it had been, but when I awoke, I found I had been sleeping in a pigsty. Inside, a sow had just finished giving birth, with seven or eight newborn piglets all sleeping around me. The minute I looked at myself, I realized that I had become a little pig too. And so it happened that I had been reincarnated into a pig and, feeling distraught, I was determined not to drink pig milk or touch any pig food, as I’d rather starve to death than continue to be a pig! To be sure, seven days later, I died of hunger, regained a weightless human body and left the pig pen. I ended up floating to another village.”

“Again, it was bitterly cold as I walked into a house looking for shelter. Again, the house was empty, and again several warm coats were hanging in the hall. When I was reaching for one of them and touched it with my left hand, I suddenly remembered the lesson of being reborn into a piglet after stealing one. This time I was very alert and quickly retracted my left hand, being determined that I would rather freeze to death than steal. But as it was so cold, I finally passed out. I did not know how long it took, but when I woke up, I had been asleep in a delivery room and had become a baby. I wanted to talk but couldn’t. The most unfortunate thing was that my left hand had turned into a pig’s trotter apparently because it had touched the coat. And for all my life I’ve been regretting it. So, in this life I am a human being living in poverty. When I heard about Buddhism, I was converted by the old Master Nan T’ing of Huayen Lotus Society. I’ve kept this matter a secret, and no one but the old master knows the truth. Please, help save my face and don’t tell anyone else. Have mercy with me!”

Ladies and gentlemen, it was only more than ten years later when Weng had passed on, that Master Jo Yu decided to disclose the secret to the public, in the hope to warn them about facts of causality and transmigration.

Having passed the highest-level civil service examination, Huang was appointed prefectural governor of Huangzhou, Hubei in central China, at the age of twenty-six. One day, while napping he had a dream. He had headed to a village where he saw an elderly woman with grey hair standing in front of an incense table just outside her home, as if memorializing someone dead. She placed a bowl of noodles on the table and called someone’s name. Huang went up to the table, found the hot noodle soup smelling of celery, and ate it without realizing what he was doing. When he woke up, there was still the taste of celery in his mouth.

The next day he had the same dream, and when he awoke there was once again on his tongue this same taste of celery. In surprise, he walked out of his official residence along a road he recognized from his dream. Soon, he stopped by a house and saw an older lady in a commemorative ceremony. He went up to ask if she had called someone to come and eat her noodles.

The woman replied, “Yesterday was an anniversary of my daughter’s passing. Because she liked to eat celery noodles when she was alive, I did summon her soul while outside to come back and eat the noodles.”

“How long ago did your daughter pass away?”

He thought to himself, this is really weird. I am twenty-six years old, and yesterday happened to be my birthday.

The woman continued, “She was my only daughter, liked to read and believed in Buddhism before she died. She was also a vegetarian, and was very filial. But at that time, she refused to marry, and when she was twenty-six years old, she fell ill and died. But when she departed, she said she would be back.”

Huang asked, “Where was her maiden boudoir? Would it be possible for me to take a look?”

The woman pointed to her room and said, “That’s the one. Go in and see for yourself.”

So he went into the room, and apart from a bed, desk and chairs, he saw a large locked cabinet next to the wall.

The woman told him, “The cabinet is full of her books.”

She replied, “I don’t know where she left the key, and so it’s been locked all along.” At that moment, Huang thought and suddenly remembered where the key was, and thus he located it and with it opened the cabinet. Inside were all notes and manuscripts. He read them carefully and found her writing style and artistic taste to be exactly the same as his own. It then dawned on him that he had now returned to the home of his previous life. The woman who had died twenty-six years before was his former self, and this old lady had formerly been his own mother. But alas, now there was only the mother herself left in the family living all by herself. A sudden wave of grief came over him, with tears streaming down his cheeks. He kowtowed to her calling her Mother and told her he was her daughter’s reincarnation. Afterwards he took her home and provided for her all along until the day she died.

To commemorate this event, Huang had a pavilion built in the backyard of his official residence, surrounded it with bamboo plants and named it Dripping Lushness. Inside it he installed a stone statue of himself with a paean inscribed on it,

In a dream is a life dreaming.

Awakened to life beyond living.

The tribute says that the me in this stone statue may look like a monk, but I am a layman who grows hair. However, if one says that I am a worldly man, my mind transcends this world, like that of a renunciate. The woman in my dream who liked to eat celery noodles was my former self. Indeed, there is life beyond life that transmigrates nonstop in reincarnation.

Ladies and gentlemen, this woman had been someone from Wuhu county in Anhui province of central eastern China. Upon death she was reborn as Huang Shangu, a scholarly man of Xiushui, Jiangxi province in a central southern part of the country. This story is detailed in the Annals of Xiushui County.