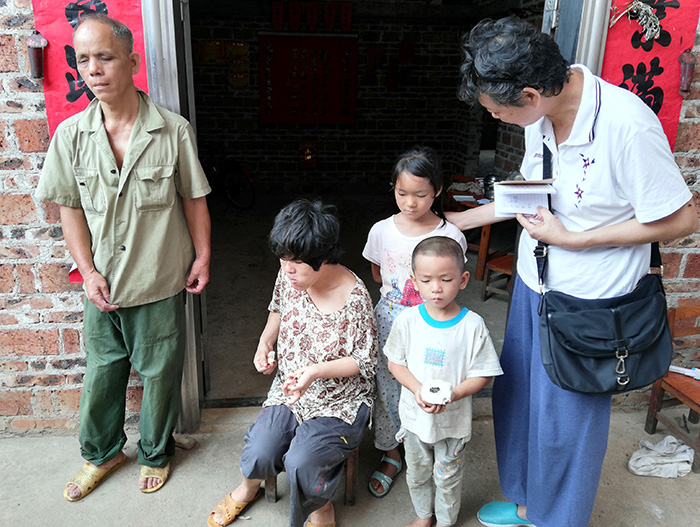 During the summer vacation, our volunteers of Living Compassion in Guangxi, China have worked tirelessly visiting families of the aided students to learn about how they have been faring and found that the students and their families are going through delightful changes. Here are just a few of their stories to share with you.

When outstanding student Tan Huimei was accepted by a reputed high school, everybody thought it was good news. But her family was too poor to pay her tuition, so she had to drop out to help her father with farming instead. Since the future of rural girls lies usually in being married away, Huimei was sad and constantly in tears.

As Living Compassion learnt her story, we went to persuade her father that the more girls learn at school today, the more promising their life would be in future, so marrying was not the only way out for Huimei. We also suggested that we would offer financial help if she returned to school. Finally, we convinced him. Three months later, our volunteers secured the Elm High School for her and got its principal on board. Huimei was happily back at school.

After twelve months, our volunteers visited her at home again to learn that Huimei had worked hard after a three-month dropout and was able to catch up within only one semester. This year she has joined a model class and been chosen as its leader, winning admiration from both teachers and classmates. She has now become a confident girl as well as a top student.

Eleven-year-old Feng Weimin is considerate for her age, spending summer vacation helping her mother with farm work. While harvesting rice once, unfortunately, her right hand was caught by the threshing machine, which broke her elbow, tendons, arteries and nerves, requiring first aid and multiple surgical operations. The high cost of surgery, however, soon depleted the family’s meagre savings plus loans from relatives. Half way in her treatment, her parents needed to pay up another 50,000 RMB yuan before continuing her medical care. They had no choice but to accept an amputation of her hand.

At this critical moment, Venerable Shan Ci received a report from our volunteers, and it reached Venerable Guan Cheng, who instructed that we should help keep the child’s hand at all costs. Thereupon, Living Compassion launched an emergency assistance program to cover the cost of her surgical treatment and save her right hand.

On a visit to her home a year later, we learned that Weimin, who had been expected to take a year off from school, returned after just one semester, and had started using her left hand to write while her right hand was recovering. 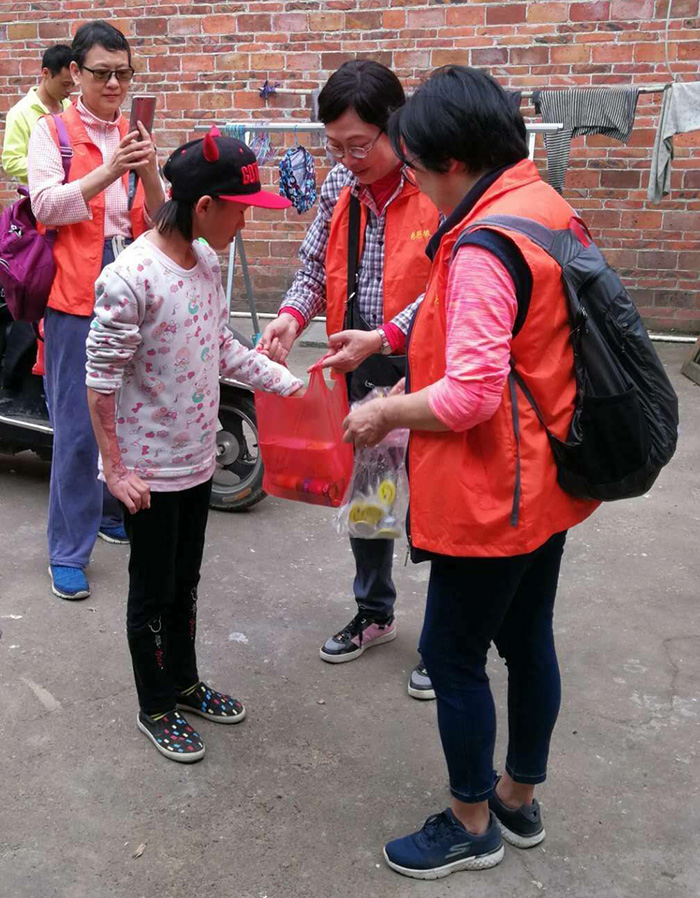 In another story, second-grader Huang Jing had talent for dance and her teacher suggested that she take extra paid lessons to develop her talent. Sadly, as her father had died in a car accident six years before, and with her mother raising her and her brother alone, the family had no ability to support her education beyond normal schooling, so Jing’s dance lessons remained a dream.

When volunteers of Living Compassion visited Jing at her home, her eager eyes told them: I want to dance! With our encouragement and aid commitment, the young widowed mother was so moved that she agreed to have her take dance lessons after school.

Now, nine-year-old Jing has represented her township in various performances around cities and districts and has even won several awards for her artistic talent. We look forward to a bright future for this budding gifted dancer!

As to student Qin Han of Genzhu High School, she was born with the right half of her face swollen due to a congenital blood tumor. What was worse, just a few days after her birth, her father died in a fall from a cliff while picking medicinal herbs. When Han was three-months old, her mother simply disappeared from home. Little Han and her two sisters were all under their grandparents’ care. Today, with both their love and care from her siblings, she has grown into a charming, slim young lady.

When we paid a visit to Han’s school, her principal, teachers and classmates were full of praise for her. They told us that she had done well in all subjects and was polite and considerate. Although she looked somewhat different physically, Han did not let it become a barrier for her. Instead, it has become a force to drive her forward. Her perseverance, self-confidence and positive energy is unequalled among her peers.

Asked if she wanted to go through surgery to change her look, she replied that her grandparents were her only caregivers, and since they were getting on in years, she did not want to give them a bigger financial burden because of her surgery. At present, Living Compassion is working on ways to help pay for Han’s surgery so she could receive the needed treatment and start a life that she deserves.

Visiting aided families deep in the mountains has revealed to us many more such moving stories. Zhou Yanhong, for one, was admitted to Guangxi Normal University with high scores last year. Her father is a farmer and her mother has long been sick. Her big sister is in year four and her second sister in year one at university, with her little sister still in grade eight. The total cost of their schooling being very high, the family of six needs to borrow money to make ends meet.

Yet, when we asked what made them willing to make loans so they could keep their four daughters at school and in university, her parents said that girls should be the same as boys in getting educated and having a promising future!

In this way, the honest, down-to-earth Zhou family is raising children with good character and good school marks. High-achieving Yanhong could have gone on to a more prestigious university, and yet in order to lessen the financial burden on her parents, she chose to go to a normal university to train to be a teacher instead, where tuition is much cheaper. Now, with help from Living Compassion, we hope to see all the four sisters successfully complete their education and become worthy members of society.

In the charming Bahengdun Mountain villages, we find still more such stories of simple kindness and love among human beings. The death of Junkuan’s parents left behind him and his two brothers, the oldest not yet ten years old. His uncle gave up his well-paying city job and returned to the village to raise the three orphans left by his brother. Doing this, he was unable to find a wife and form his own family. With a smile, he told us that he just wanted to wait until all his nephews grew up.

In Yongxie’s family, his father has died while her mother, being blind and sick, cannot take care of even herself. So, his father’s brother has taken over the job of raising the four kids including Yongxie. Although living a poorer life now, he said he has absolutely no regret.

And after Huaming’s father died, his mother walked out on him and his three siblings. His uncle and aunt, already raising three children of their own, took them in to bring them up. 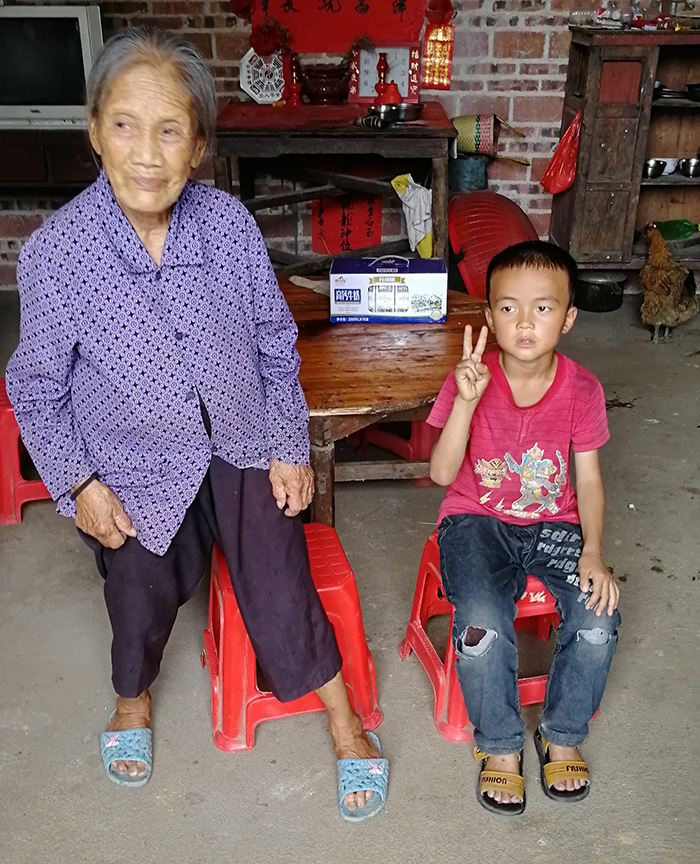 It is our hope and commitment that Living Compassion helps such families in need stand on their own feet, so their children no longer worry about their future. We will be delighted to see them all grow up as healthy human beings in the sunshine of love and compassion.

Living Compassion is a charity program set up by Venerable Guan Cheng at the International Buddhist Temple in early 2017. It now runs projects and campaigns assisted by volunteers in south China from Guangzhou to poor and remote villages of Guangxi, Yunnan and Guizhou provinces, with an emphasis on aiding education for children and supporting families in extreme poverty. The above are just a few instances of what impact Living Compassion is having in Guangxi alone.