Not Seeing Mount Lu Just Because One is Right in It 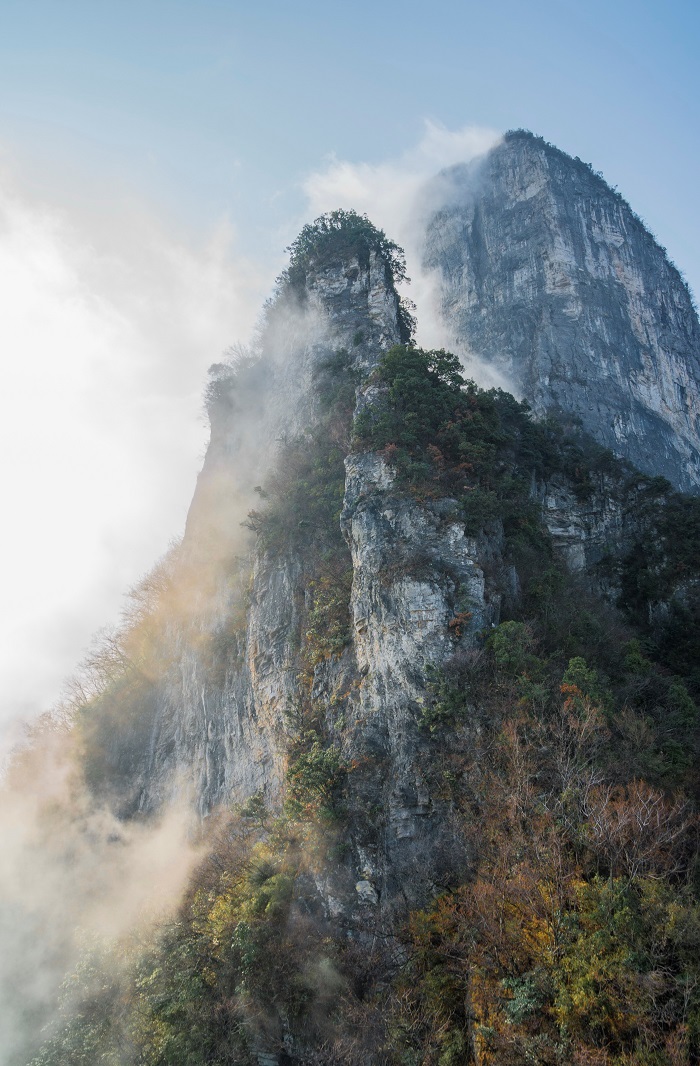 Su Shi (1037-1101) wrote a short poem titled “Written on the Wall of Xilin Temple” (see Note 1), describing the scenic Mount Lu where the temple was located. Its meaning is both philosophical and rich in Chan.

Its frontal view is a mountain range, the side view a peak.

At a differing altitude or distance, the view changes.

One may not be able see the true face of Mount Lu,

Just because they are in the mountain themselves.

The first line is about how, when he first arrives at Mount Lu, the poet is immediately fascinated by its majestic beauty and unique grandeur. From the front, the mountain ridges appear to be soaring into the clouds, stretching far and winding unendingly. Interestingly, if one takes a look from the side, what they see may be stunning peaks protruding everywhere and vertical pinnacles cutting straight into the blue sky.

“At a differing altitude or distance, the view changes.” Indeed, the appearance of Mount Lu is intricate and manifold. Whether from afar or up close, looking downward or upward, the scenes are multivarious. They could be hidden in clouds or behind mists, red over green and vigorously resplendent, or having springs and fountains gushing and splashing, making it breezy and cool all around.

So, what is the true face of Mount Lu, one with so many steep zeniths and tall, meandering ridges? Well, visitors, at their specific location up the mountain and able only to envisage a part of it, miss a complete view of the whole behemoth of a mountain. Naturally, the scenery they capture varies with the vantage point and angle they take. Thus, “One may not be able see the true face of Mount Lu, / Just because they are in the mountain themselves.”

The implication of these two historically famous lines inspires one to appreciate a crucial law about everyday human life. As one tries to understand the world they inhabit, often because of the particular place they occupy, the issue they see may be of a unique focus, and thereby limit their understanding and likely make it one-sided, as they are not getting the big picture. If one is stubborn, self-righteous or opinionated, one might develop prejudice and as well cause friction in relationships with others. If one is unable to grasp the truth, essence or entirety of a particular situation, can it be because those involved are right “in the mountain themselves”?!

Thus, with Buddhism, the reason people sometimes fail to see the truth may simply be that the truth itself lies close at hand, in fact, so close that it gets ignored. This is because when people are reaching beyond their grasp, they get entangled in detail and find it hard to extricate themselves. And if they try further to split hairs they likely end up in a dead end.

In this connection, a Chan gatha goes, “The Tao is found in the rubble”. From an enlightened perspective, the Tao, or the truth itself, is omnipresent, and has it ever left us? Only, we mortals, when obsessed with a myriad of illusions over germination, existence, decay and cessation, and transmigration in its many variations, go for the false while abandoning the truth, as if one does not see the true face of Mount Lu once they are in it. How, then, can practitioners learn and focus more effectively?

This is what Master Hui Neng (638-713), Sixth Patriarch of the Chan school, teaches us, “The Dharma exists in the world and does not leave the wisdom of the world. To seek Bodhi while trying to leave it is like pursuing a rabbit’s horn”. Practise the Holy Way without avoiding one’s daily life, and observe one’s own thought, for instance. Note that all its rises and falls are impermanent, ever-evolving and non-stop. When mixed with delusion, it comes and goes with karma while in the first place after all, it has indeed no real physical entity in it to be attained. On further observation, this is how thought and delusion work, and how, in fact, all things work. With momentary transience and impermanence, they come about when conditions assemble and perish once they disperse, possessing no physical self-nature. Since all things have no reality and change or mutate as though by magic, how could a wise person sustain with a mind involved in attachment that imprisons itself? With such a realization, hopefully one may be able to temporarily let go of their attachment and take a step further towards enlightenment.

Everyone, we now know that if one wants to see the “true face of Mount Lu”, they better put in efforts at the place which is closest to them, i.e., their own mind. What makes the difference between sentient beings and Buddhas is the mind. If the mind is with the defiled and has its back turned against enlightenment, it belongs to that of a sentient being. Yet, if it is turned towards enlightenment against defilement, it belongs to that of a Buddha.

Buddhist scriptures say, “What approach need one practise to be liberated from life and death? The only approach is to cultivate the mind.” Good and evil, things all arise from thought in the mind. The mind, therefore, is the foundation, and to free oneself from the suffering of transmigration, first, cultivate the mind. As another saying goes, do not seek Buddhahood from afar as it is within your very own mind, and as everyone has such a Sacred Mountain Pagoda, they may cultivate it right there underneath it. If sentient beings are able to both subdue and purify a mind that seeks attachment while being ripped by confusion and turmoil, they will be given to accepting that all phenomena are after all illusory, and eventually realize the true nature of tathata, or suchness of all things.

Note 1:  Xilin Temple is located at the northwestern foot of Mount Lu, being one of its several famous ancient monasteries. It was first built in the Eastern Jin dynasty (317-420) and once renamed Qianming Temple during the Song dynasty (960-1279).