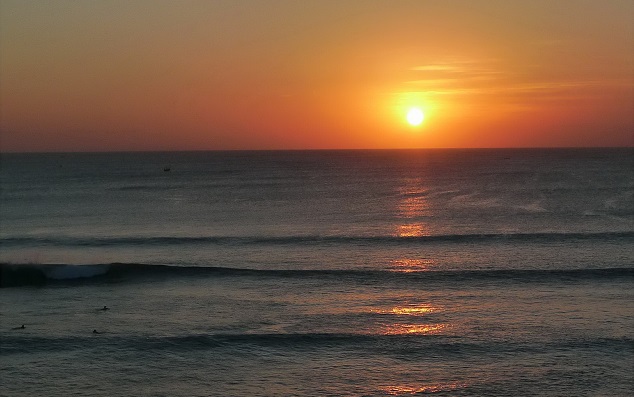 Everyone seeks happiness and enjoys it, but without exception happiness in human life is always short-lived and impermanent. So then what is true, absolute, eternal happiness? To discuss, we look at three different types of happiness: the human world’s happiness arising from five desires, heavenly joy from meditation and lastly, the other-worldly bliss of Nirvana.

What is the human world’s happiness that arises from five desires? Humans, addicted to pleasures, think that the happiest things for them are nothing beyond wealth, fame, eating, sleeping and sex. Money and wealth brings material pleasure. Fame is a good reputation and vanity, with charming compliments from other people. Food and eating endorses killing. Sleeping here embodies loafing and laziness. And sex in this context refers to lustful obsessions. These five objects of vile desire are what humans commonly pursue. The consuming greed that drives people, the anger displayed in their relentless pursuit and jostling, and the delusion that fuels their addiction and plunder, are the three viruses that cause desire. One must remember that avarice knows no bounds, and the constant urge to fill it eventually becomes self-driven and painful. Even when one’s greed is satisfied, the pleasure does not last. And once ended, the ephemeral happiness turns into a pain for the loss once more. Hence, we say that happiness in human life is a sheer void and impermanent.

The second type of happiness is heavenly joy resulting from meditation, or dhyana, from the point of view of triloka, the three realms. The sensuous realm (kama-loka), fine-material realm (rupa-loka) and immaterial realm (arupa-loka) together make up 28 planes of existence, each with a special joy for the devas. The planes of six desires within the sensuous realm still have sexual lust among them, but within the next 18 planes in the fine-material realm it is gone together with the desire for eating, and there is incipient heavenly joy from meditation albeit with lingering concerns about material and form, and some desire. The final four heavens in the immaterial realm, however, see a complete uprooting of all desires for material gain, where there is no physical form but refined mental joy from meditation held within. The subtle yet wonderful joy accessible here is thousands of times more powerful than the happiness available in the human world that hinges on five desires. Its life span is counted in tens of thousands of years, and it is all pure, enduring joy without pain. However, the caveat is that it does have a limit and when that comes, the devas must reincarnate in the cycle of rebirth. Therefore, Buddhist scriptures say, “Even if you cultivate until you have no desire left, it does not compare to the world in the west”.

The final type we look at is the supreme bliss of Nirvana. “Nirvana”, a Sanskrit word, means a state of complete wisdom and virtue without suffering, where there is no birth or death except absolute and eternal joy. The concept of Nirvana is used in contrast to that of life and death, and is thus relative rather than absolute, as an approach to teaching for the sake of convenience. Because there is birth and death, we are able to use the concept of Nirvana to indicate a release from the cycle of rebirth and portray a state of immortality. If you truly attain Nirvana, however, you will be totally immersed in wisdom, attaching yourself to neither the self nor the Dharmas. Not only will the names of life or death be impossible, but even the name of Nirvana itself will be irrelevant. This is because the state of enlightenment can be enjoyed but cannot be named. Therefore, the resulting joy here is transcendental, absolute and eternal. It is experienced by the one in enlightenment only and is beyond description by word and concept.

Nothing compares to the utmost bliss of Nirvana, neither the human world’s happiness based on five desires, nor heavenly joy out of meditation. Again, Buddha says that heavenly devas still have to transmigrate between life and death and their joy does not last. In the final analysis, only this other-worldly nirvana is where absolute and eternal bliss lies.

Once upon a time, the king of Pu’an, a Buddhist, invited four kings from neighboring countries to dinner to discuss what the biggest happiness was. The first king said, “The biggest happiness is in travel.” The second king went, “When you listen to music with your lover, you are the happiest.” The third king explained, “Being vastly wealthy and having all you desire come true gives you the utmost happiness.” And the other king declared, “Power and control makes one the happiest.” The King of Pu’an, on the other hand, disagreed with all, “What all of you just pointed to is a foundation for pain and suffering, not real happiness. Please note that extreme happiness leads to sadness and from happiness comes suffering. You could be happy holding down others or you could be unhappy being held down by others, but either way you reap evil karma. Only by having faith in Buddha and cultivating yourself until you have neither desire nor pursuit but a clear and calm mind, may you attain Buddhahood and achieve the greatest joy after all.”

Whereas Buddha views life as a dream, the ordinary man is obsessed with the dream they live in, vouching it is ever real. Buddhist scriptures tell us that all sentient beings and bodhisattvas have not released themselves from their dream. It is only Buddha that lives in no dream, as he has put a stop to all his suffering and tempered his insidious habits. Indeed, he is one of those who have awakened from their worldly dreams and ignorance, and arrived at supreme nirvana in the long run.