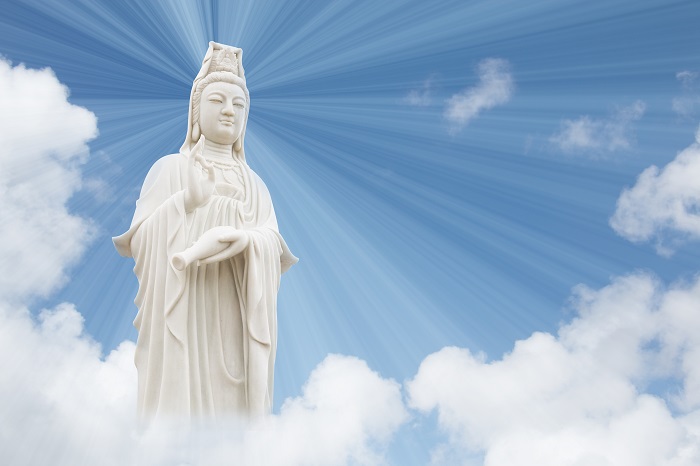 Towards the end of the Qing dynasty (1636-1911), there lived Li Shu (1883-1954), a revered legal professional, who would doze off at a certain time of the day every day when his soul was invited to the underworld to serve as a judge. Meanwhile, a colleague, Lin Youxiang, was attracted to ghosts and would often have lengthy chats with him about the netherworld. Based on these conversations, Lin wrote a widely-circulated book titled Questions and Answers about the Hades. It contains, among others, the account of a ghost reciting the Diamond Sutra, with a particular relevance to the persuasion of good behaviour against evil and upholding of morality. The following is an excerpt.

Li Shu replied, “There are a great many deceitful, quibbling ghosts, but as soon as the judge produces compelling evidence, they plead guilty. I once tried such a niggling ghost. When alive, the individual of this ghost had done good outwardly but committed evil in secret through killing, theft, licentiousness and delusion. Though there was copious, solid evidence, he flatly denied it. And just as we were about to mount torture to get a confession, the ghost suddenly started chanting the Diamond Sutra non-stop. Apparently, this person, while alive, had used to chant the sutra in full so often that his ghost could now do it ever so fluently. Soon, however, my assistant judges saw a red shining light emanating over the ghost’s scalp, and they hurriedly requested a pause of the trial. At the same time, they all stood up in awe.”

Li wondered, “Being adjudicators, why are you all standing up to a criminal in such veneration?”

His flanking assistants answered, “This ghost was chanting from memory the Diamond Sutra with a Buddha’s light appearing over the crown of his head. If we had continued the trial, we would have blasphemed against a sage. So, we were obliged to halt the trial.”

Thereby, Li also stood up, asking, “How, then, should we proceed with this case?”

One of his assistant judges suggested, “We could sentence it now to a few times of human reincarnation, and leave the conviction until it loses all its memory to recite the Sutra.”

Li objected, “Wouldn’t reincarnation into humans give it an easy run for its sin? And wouldn’t it considerably delay its retribution by three to four hundred years while it keeps reincarnating?”

Thus reasoned one assistant judge, “If it were allowed to reincarnate into short-lived humans, then we could perhaps retry it within two to three years. Of course, it deserves a perfect karmic punishment for its sin, but meantime, it’s indeed a merit to recite the Diamond Sutra verbatim. These two aspects each have their own karmic force, and they will be reaped separately as well, deservedly down to an iota.”

As a result, Li Shu and his assistant judges unanimously sentenced the ghost to reincarnation into humans once again, and that for the time being, the case be stayed.

Diligent readers, the merit from chanting Buddhist scriptures is truly incredible. The Diamond Sutra points out, “Subhuti, talking about this sutra and its four-verse gathas, bear in mind here that all the world, heavens, humans and asuras should be provided for, like a pagoda and temple, let alone someone who understands, memorizes and recites it in full. Subhuti, know that this person is to attain the supreme and most unique Dharma.” It goes on to say, “And again, if someone understands, memorizes and recites this sutra with its four-verse gathas and explicates it to others, they have plentiful blessing.”

Accordingly, for anyone who understands, memorizes and chants the Diamond Sutra and its four-verse gathas, their merit is so great that it is indescribable, let alone reciting the sutra from memory in its entirety. It is a pity that the individual of this ghost had done an inordinate amount of evil before death, and the merit from chanting this sutra would only suffice to delay the karmic retribution it deserved. Most important, the karma made by sentient beings could be potent enough to impede the Holy Way. Therefore, do not ever make light of the slightest evil and assume it is not sinful, for there is retribution upon death, neither more nor less by a morsel.

According to Notes by Jie Xian, Old Man Ba of Lingyin and Hui the Woodcutter, a Qing period collection of accounts of retribution with divine impact as seen or heard, there was a man named Dai Xing in Suzhou, a gifted scholar from a wealthy family who had passed the provincial imperial civil service examination. He had, however, a disposition to be wickedly arrogant and do evil, and thus had harmed many innocent people. Some of those victims went to the ministry of works and aired their grievances. After ministry officials confirmed their cases, Dai received severe punishment and eventually died in prison.

One day, as it happened, a neighbour of his died a sudden death, but because his body remained warm, his family did not promptly bury him. Three days later, the man surprisingly woke up and told his family that after his death, he had witnessed how Dai, their affluent ex-neighbour, was suffering in the underworld.

That was when Dai happened to be hauled to the Hall of the Hades for interrogation. After Lord Yama looked up all the evil Dai had perpetrated, he flew into a rage and ordered him hurtled into boiling oil. On the flat ground in front of the hall, there at once appeared a giant wok full of the scalding hot liquid, and the jailers on standby were about to pitchfork him. In desperation, however, Dai remembered the Great Compassion Mantra and all of a sudden began to chant loudly, “Namo ratna trayaya”. With that one single chant, the wok of oil instantly dissipated, restoring the calm next to the hall, and on its ground rose a lotus flower.

Lord Yama said, “This man is guilty of the most heinous crime and should sure have been punished with mighty severity, but as he is now chanting the Great Compassion Mantra, no torture can be applied on anyone who does that. Hence, he must now choose some family who has done evil and be reincarnated to receive the retribution there himself.”

Reported a jailer to the lord, “A county magistrate in Jiaxing is right now holding a sacrificial service imploring for a son, and he has done evil over three lives.” Hearing this, Lord Yama immediately ordered Dai to be reborn there, on a specific date at a specific time. Meanwhile, he assigned Dai’s dying neighbour to return to life and witness Dai the sinner’s rebirth in Jiaxing, so he could use the story in persuading mortals to stop evil and do good.

From this one could see that the merit in reciting the Great Compassion Mantra is magnificent and incredible. Maha Karuna Dharani Sutra maintains that recitation of this mantra may “bring sentient beings solace, eradicate all disease, gain longevity and prosperity, obliterate all flagrant sin and vicious karma as well as adversity, increase the merit of all undefiled dharmas, accomplish roots of all goodness, stay away from all fright and quickly satisfy all aspirations”. Buddhist practitioners must recite the Great Compassion Mantra every day, to not only be blessed against calamity by Avalokitesvara, the Bodhisattva of Mercy and Compassion, but also be able to nurture and sustain their own bodhicitta.

Mortals’ thought and behaviour are nothing but sin and karma, let alone those with a wanton disregard for killing and meat-eating, stealing, licentiousness, lying and slander. We must be cautious in going about our worldly chores and do good against evil, because reward and retribution unremittingly follow karma like a shadow, and they are never wrong by an ounce.