Sweep Away the Dirt 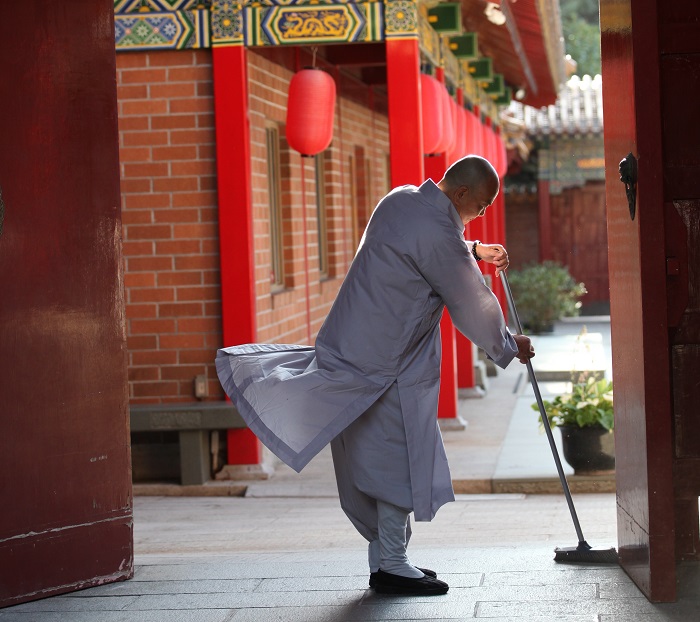 Many Buddhists have ducked into an ivory tower by getting hung up on the written word. They may have thoroughly memorized terms of the Consciousness Only Theory, or know by heart arguments behind the Three Theories propounded by the Buddhist philosopher Nagarjuna (ca 150–ca 250 BC), but they do not bother to participate in chanting, hymns singing, worshipping and repentance or other services required by a monastic life. They regard Buddhist theory as more important than its application. They may be eloquent in debates and their arguments may sound well-grounded, but their behavior is often full of greed, anger and delusion. Indeed, they fail to practice what they learn from the scriptures.

It is true that the Buddhist scriptures are the ultimate Dharma treasures, capable of enlightening the readers. However, if scholars are obsessed with the meaning of the written text, not valuing the need to practise what is in it, they will end up increasing their own ignorance over attachment to the ego and to phenomena.

In the Diamond Sutra, Buddha refers to Buddhism as a raft on the river. “Therefore you should not hold onto it, whether it follows the teachings of the scriptures or not. Buddha often says, You, Bhikkhus! If you understood my metaphor of the Dharma as a raft, then you should give up what is in the scriptures, let alone what is against them”. When a traveller gets the point, he will not continue to linger on the ferry raft, for he knows he will only reach the other shore after giving it up.

Did you know that since ancient times, many practitioners who were illiterate and unable to read scriptures have awakened to the ultimate truth of the universe? Among these saints are Huineng the Sixth Patriarch (638-713) and Cudapanthaka the Great One.

Huineng was an illiterate kitchen hand, but after enlightenment, he shared teachings and quotes from the classics, and eventually became a great master of Chan Buddhism. Cudapanthaka was Sakyamuni Buddha’s disciple. Illiterate and forgetful, he used diligence and perseverance to attain arhatship. The incredible deeds of the former are contained in the Sixth Patriarch Platform Sutra, but the story of the latter is little known. Here let me share with you how Cudapanthaka became enlightened:

The story goes that among Sakyamuni Buddha’s sangha were two brothers Mahapanthaka and Cudapanthaka. The latter, the younger of the two, was dull and slow. His memory was poor and what he learnt he soon forgot. Thus, after a few years, little progress was made in his cultivation.

One day after lunch, all the monks in the sangha walked to a bamboo grove for a nap. It was the height of summer with the sun beaming down like fire. The bhikkhus found its shade pleasant and restful, but Cudapanthaka alone was weeping.

Buddha happened to be walking by, and kindly consoled him. Cudapanthaka said, “World’s Great One! My elder brother and I took the vow at the same time to be monastics. My brother is smart and attained sota patti phala soon. But I am stupid, I can’t even recite one verse. My brother is very disappointed. He told me to leave the sangha and look after our elderly parents at home and not to waste time. I fear I will not have another opportunity to practice Buddhism in this life. That’s why I am sad. I beg Buddha to show mercy and bless me with your guidance!”

Caressing Cudapanthaka’s scalp, Buddha said, “You need not be sad, and neither need you leave the sangha. Let me give you one simple gatha to recite, ‘Sweep away the dirt’. You should keep chanting these four words every day”.

However, being slow and forgetful, Cudapanthaka could not remember them even though he tried hard. Feeling depressed he started to cry again. Buddha said to him, “Every morning, after you give your sangha’s clothes a good shake, you sweep away the dust and say ‘sweep away’. In the afternoon, when you clean up the bamboo house and remove rubbish, say ‘the dirt’. This way, you chant as your work, and you will not forget the gatha ‘Sweep away the dirt’”.

Cudapanthaka followed Buddha’s advice and kept chanting “Sweep away the dirt” whenever he was dusting, cleaning and sweeping the floor. Sympathetic, the other bhikkhus often chanted with him to help him memorize.

Thus, more than a decade had passed. One morning, while the bhikkhus were meditating in the bamboo grove, Cudapanthaka was cleaning in their living quarters and kept muttering, “Sweep away the dirt”. Just then, the sun shone through the windows on the dust floating all around. He stared at it and his mind immediately went into Samadhi. Exiting the state a while later, he suddenly understood it all and said, “There are two types of dust. The dust on the outside can be seen by the naked eye and easy to sweep away. The dust on the inside, that is, greed, anger and delusion, however, can only be seen by looking through your own mind. If you can’t remove the inner dust, you will be perpetually caught up in the cycle of rebirth. Compassionate Buddha! I now get it! I have swept away my own inner dust”.

All of a sudden, over the top of Cudapanthaka’s head, a radiant glow of light shone straight into the depth of his heart. That is how he attained arahatta phala.

After enlightenment, naturally possessing all the world’s knowledge with an unimpeded eloquence, Cudapanthaka became one of Buddha’s sixteen disciples. Although he had iddhi-vidha, a supernormal power to instantly move anywhere unrestrained by time and space, he kept using his own mere strength to clean the dust for his fellow bhikkhus. Every day, he kept chanting the gatha Buddha gave him, “Sweep away the dirt”.