Thai Monkeys and Their Attachment 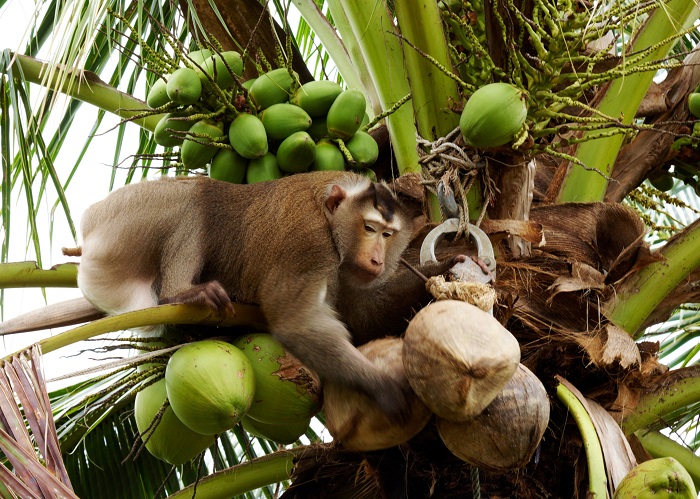 Upadana is an important Buddhist concept of attachment, grasping or clinging. Human beings’ attachment can be strong, and it arises from their innate greed, anger or delusion. In fact, this is true not only with humans, but also with animals beings. Monkeys  in Thailand, for example, are often captured merely because of their dogged craving.

In Thailand, many coconut farms use monkeys to pick the fruit where the tall trees with straight trunks are difficult for workers to climb. The locals know well that monkeys are nimble and make best coconut pickers, and they have figured out a way to catch them. How do they do it? Well, monkeys are not stupid animals. They are agile, smart and good at learning, and it is not easy to make them fall into a trap, but the farmers simply take advantage of their greed for food to routinely catch them.

Banana is the monkey’s favorite food, and thus the local people use it to lure them. First, they pick some very large, heavy coconuts, and in each of them drill a long, narrow hole in the center. Then they put banana into the hole and place the coconuts where monkeys frequent. When all is ready they go in hiding and wait to pounce.

Fond of banana and curious, the moment a monkey smells the fruit, it does everything to check it out. It soon finds the small hole in the coconut and puts its eye close to it to discover with glee the banana inside. But since the hole is tiny, when the monkey tries to get the banana, it is not that easy.  At this point the animal could either give up the banana or continue trying, but how could it give up seeing the banana is already within reach? So the monkey, ever on the go, takes the big, clumsy coconut and drags it along. At this moment, the locals rush out and easily catch it in a net. The poor animal gets captured simply because it craves for the banana too much and will not let go. After that, it has a strap placed over the neck and becomes a handy coconut-picking tool for the farmers.

Speaking of the monkeys who lose their freedom because of an unrelenting attachment to banana, don’t we humans behave in much the same way? In families, we see members giving in to their own self-esteem blame relatives in foul language for a slightest, unintended mistake. People forget about righteousness, lose their mind and even their life chasing after wealth and clinging to it. Throughout, their personal conduct gets driven by wants and desires. In a moment of anger, they may assault and kill another human being.

So how is human attachment really different from that of the Thai monkeys? In fact, when the monkeys see farmers chasing after them, they could just give up the banana in the coconut they are about to reach and skedaddle. But their attachment to the banana they are preoccupied with ruins their judgement, and that is how they lose their freedom after all.

We should all take a good lesson from the Thai monkeys, learn how to hold back and let go, so we will never have such life-long regrets!