The Clouds Gone with the Storm Overnight 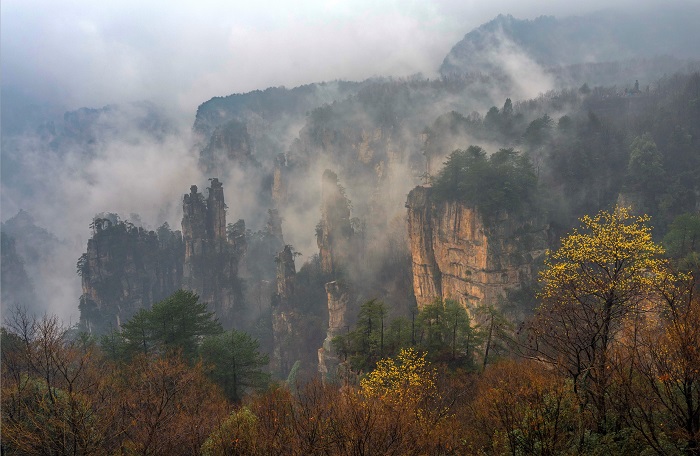 During China’s Five Dynasties period (907-960) following Tang, there lived a Chan master named Master Zhizhi, a disciple of Huanglong Huinan and hereditary disciple of Linji Sect of Chan. Once, Master Zhizhi had a residency as a visiting monk at Guizong Temple on Mount Lu, but feeling that there were too many monks living in the monastery, and as he always liked to stay away from crowds and rather live alone in serene mountains, he bid farewell to the abbot and made home up on a nearby peak.

At the time, all the colleagues persuaded him to stay, because with no one else around, there would be no donor community to support him, and since the peak was shrouded in clouds and mists, they thought he would not be able to grow food. And if, every day, he lived on nothing but yam and wild vegetables, how would he be able to sustain for long? Moreover, with beasts of prey such as wolves, jackals, tigers and leopards plentiful in the mountain, it would be dangerous for anyone to reside there all by himself. Despite all that, however, Master Zhizhi had made up his mind, and settled into a mountain-peak thatched hut, so he could spend all his time pursuing Chan. Hence, day in and day out, the only things that accompanied him were pine trees, cypresses, white clouds, breezes, the mountain itself and the moon.

Then one night, there came a sudden storm, which blew away all the mists and clouds. When the monk woke up the next morning, he found the mountain scene fresh and lucid against a rising sun. He suddenly had an awakening, and a verse flowed from his heart.

“A cabin sits atop the lone mountain ridge,

Last night the clouds went off with storm deluge.

In leisure, the monk beat them by a big chunk.”

The monk says that having built a thatched hut on the top of the mountain, I use half of it and clouds occupy the other half. Last night, there was a storm, but when I got up this morning, the clouds were all gone. The wandering clouds! In the end you are not as leisurely as my humble self, the old monk. Could it be that the clouds and mists went off with the gust as they could not bear the solitude in the mountain?

In this verse, the Master used white clouds as a metaphor for defilement (Skt: agantuka klesa), or mental trouble that disconcerts a serene mind. Known as “guest dust”, defilement arises from an ignorance of the truth. Being fickle, fleeting and endless, it is therefore described as “guest”. Defilements can muddle the mind and contaminate everything, it is therefore described as “dust”. The nature of sentient beings is, in fact, pure and untainted, but because of the diverse and disorderly external environment they are in, it leads to obsessive attachment that engenders confusion, which in turn gives rise to pertinent karma keeping them in perpetual transmigration. The old monk in this verse is apparently not entangled by any such contaminating dust, and thus he is able to enjoy genuine leisure. This shows that his true mind, like a mountain that stands tall, is unmoved by wind or rain.

The freedom or leisure referred to here is not indolence. It is a quiet mind returning to its intrinsic nature, being no longer bound by tainting dust through the contaminating six data-fields (form, sound, smell, taste, tactile and concept). In this connection, there is a saying that white clouds come and go, and yet the mountain does not move. Master Zhizhi’s firm resolve to meditate for Chan, consequently, is like a mountain that stands still, and no turmoil in the objective environment may derail his true mind.

If people adopt Master Zhizhi’s mindset to deal with afflictions, then they will become peaceful and tranquil. Living in a web of various disquieting dusts, nonetheless, it is impossible to completely get rid of disturbance from defilement, just as the Chan master, all alone in a mountain cabin, may not keep white clouds from enveloping it. All the same, as long as one is happy to be in their company without feeling attached, the white clouds cannot bother him.

“If only you care not about anything and everything, / Then it matters not when anything and everything surrounds you”, says Pang Yun the lay Buddhist (740-808). When afflictions arise, one should observe their arising and ceasing with a non-clinging, indiscriminatory mind. Beware not to be drawn by it nor to hate and intentionally eliminate it. When it eventually ceases, one’s mind gradually becomes pure and serene. Like clouds gone with the wind and rain, a clear, sunny, vast sky reappears. Such is indeed what the Chan master calls “leisure”.