The Road Ahead Long and Treacherous, As Buddhists We Search High and Low ---An interview with Venerable Professor KL Dhammajoti (Part I) 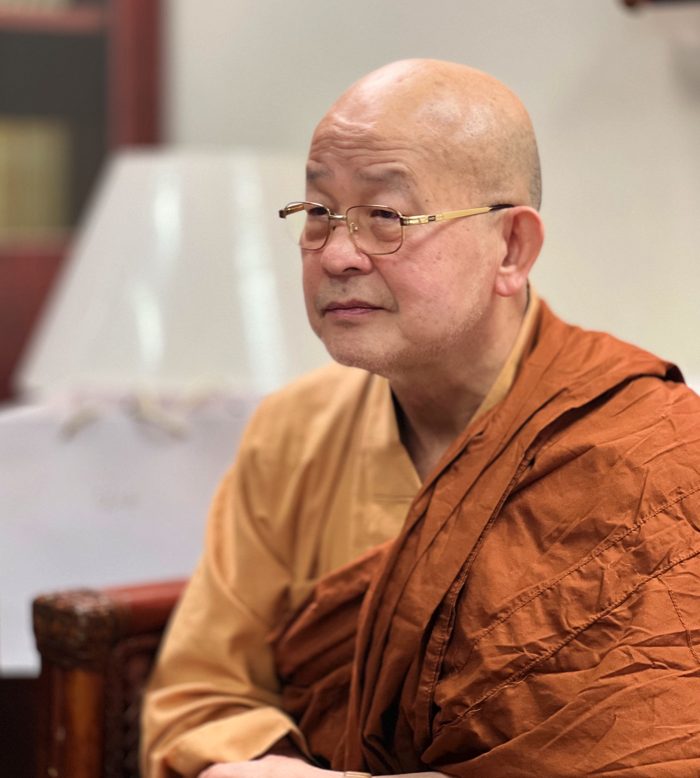 Born in Kuala Lumpur, Malaysia in 1949, Venerable Dhammajoti graduated from the University of Kelaniya in Sri Lanka with a doctorate in philosophy. His teaching career started in 1982 as a senior lecturer with the university in the Department of Pali and Buddhist Studies. In 1992, he became a professor there and was appointed head of the Department of Buddhist Classics.

As a leading scholar on Sarvastivada Abhidharma, Venerable Dhammajoti is a specialist in the agama and nikaya texts and their comparison, and is proficient in Sanskrit, Pali, Tibetan and ancient Chinese. His published works include 《法句經之英譯及研究》 (The Chinese Version of Dhammapada, Translated into English with Introduction and Annotation), The Abhidharma Controversy on Visual Perception, Sarvastivada Abhidharma, Entrance Into The Supreme Doctrine, and 《阿毗達磨：起源、意義與功能》 (Abhidharma: Its Origin, Function and Significance).

As 2022 marks the tenth anniversary of The Buddha-Dharma Centre of Hong Kong, this monastery was honored to speak to Venerable Dhammajoti for his take on the centre and its vision.

Venerable Shan Ci: Our teacher, Venerable Guan Cheng, values highly Theravada Buddhism and its practice, such as contemplation of impurity (Asubhabhāvanā), the Twelve Links of Dependent Origination (Pratītyasamutpāda), and Four Foundations of Mindfulness (Satipaṭṭhāna). With Venerable Dhammajoti’s profound insight into both Theravada and Mahayana Buddhism, could you share your thoughts with us on Theravada and Mahayana approaches and how we could achieve a sense of balance between the two?

Venerable Dhammajoti: There are two important principles I adhere to in my teaching. The first principle is abiding by Buddha’s teachings, and we must interpret our life and practice accordingly. The second is we must embrace the merits of different sects.

It is obvious that there would be no Buddhism without its founder Sakyamuni Buddha. Pure Land Buddhism, for example, is rooted in Amitabha Sutra, which is based on what Buddha said, and so we must propagate the Dharma strictly according to Buddha’s teachings.

As for sectarian differences, one’s own karma will lead them to a particular school or sect of Buddhism they follow, but we must hold an objective view of history and learn to respect traditions that differ from our own, so that in focusing on Buddha’s teachings we could be rid of bias and prejudice.

Take Master Xuan Zang as an example. A devoted Yogacara practitioner, he is known for his epoch-making contributions to Chinese Buddhism. He travelled far and wide in search of sacred books of Buddhism in India and returned with the influential Yogācārabhūmi Śāstra and numerous other Sanskrit texts. He was responsible for the formation of the Consciousness-only School in China together with his disciples, while studying relentlessly the theories and core teachings of other Buddhist sects, such as Abhidharma Sutra. We can well appreciate his devoted broadmindedness by going through his translations and compilations.

Master Xuan Zang respected traditions but transcends them. He learned that in pursuing the authentic Dharma one must eliminate their own prejudice while holding an objective view of history and being immersed in Yogacara traditions. Studying the tenets of other Buddhist sects such as Theravada Buddhism, the Prajnaparamita sutras and Abhidharma enables one to better understand the contextual rise of Yogacara in relation to other contemporary sects.

The master returned to China not only with Yogacara classics, but many Theravada scriptures including the Abhidharma and other early Buddhist sutras. These texts he pored over with application before commencing to translate Abhidharma Mahāvibhāṣa Śāstra that contained 200 chapters, and later in life, the 600 chapters of Mahaprajnaparamita Sutras, a feat rarely equalled. His talent was indeed unprecedented and his translations of now nonextant scriptures remain impactful over all Buddhist sects.

Even today, Theravada and Mahayana scholars alike continue to rely on Abhidharma Mahāvibhāṣa Śāstra translated by the master in connection with the evolution of Buddhist thought. The Chinese version of his translation survives today with its companion Sanskrit and Tibetan versions long lost. In addition, Master Xuan Zang translated the seven cardinal Hinayana sastras, an accomplishment of inestimable value to the spread of Buddhism. It was his selflessness and insight towards the importance of Theravada that made him the one to take on and succeed in the mighty exploit of Buddhist translation.

Clearly, Master Xuan Zang wanted to put not only Mahayana works into Chinese. Aside from Yogācārabhūmi Śāstra, he translated important works of other Buddhist schools. He knew that to understand Buddha’s teachings it is important to study both Theravada and Mahayana masterworks. During his years in India, the master devoted himself to the study of not only Yogācārabhūmi Śāstra but other scriptures such as Prajnaparamita sutras and Śāriputra Abhidharma Śāstra, and that’s where we should learn from him. He made a singular contribution to not just Chinese Buddhism but Buddhism the world over.

The Buddha-Dharma Centre of Hong Kong: its past and future

Venerable Shan Ci: I understand that one of your missions in setting up the Buddha-Dharma Centre of Hong Kong was to “study Buddhism to learn Buddha’s teachings, and study Buddha’s teachings to learn Buddhism”. Can you briefly summarize what goals you have achieved in terms of running an educational facility and propagating Buddhism through the centre? What areas need to be enhanced? And what is the direction of your centre for the next ten years?

Venerable Dhammajoti: The aim of the Buddha-Dharma Centre is to educate and train more Chinese Buddhist scholars. Currently, many of the internationally renowned professors in Buddhist studies are foreigners, and some of them are not even Buddhists, they are Christian or Catholic priests. While some of their work is worthy of acclaim, as they are willing to spend an enormous amount of time studying the source languages, yet at the same time one cannot but question the motive on the part of a few of these scholars in their scripture translation. For one thing, “zhenru” (bhūta-tathatā) was mistranslated as “higher model”. It is serious issues like this that are waiting for Chinese scholars to elucidate and rectify. I have especially noticed that Chinese Buddhist scholars have often not been able to gain international recognition due to a lack of solid research achieved in China, a balanced view over history or a deep holistic understanding of the continuous development of the Dharma. There is also a lack of competent linguistic tools and methodology.

The mission of The Buddha-Dharma Centre of Hong Kong is to foster the growth of Buddhist scholars with an emphasis on returning to Buddha’s vision. As I said earlier, it is important to “study Buddhism to learn Buddha’s teachings, and study Buddha’s teachings to learn Buddhism”. What I mean by that is we have to pursue academic excellence and achievement. To accomplish that, we cannot be working merely as researchers, but must study Buddhism through practising it. Master Xuan Zang, Master Yin Shun and Master Lu Cheng, they are all role models for us and they all bring me inspiration.

I have been advocating a return to Indian Buddhism, and this is a vision Master Xuan Zang, Master Yin Shun and Master Ouyang Jingwu, mentor to Master Lu Cheng, all shared.

Returning to Indian Buddhism: a vision shared by many masters

If we prove that the strong, successful development of Chinese Buddhism has stemmed from Sakyamuni Buddha’s personal teachings and practice, we can then appreciate that a return to Indian Buddhism will enhance the intrinsic values and virtues of China-based Buddhism. It will be a meaningful, significant thing to show that what Buddhism in China promotes is the very approach taken by Buddha himself. We should therefore study diligently the Dharma traditions personally taught by Buddha to establish that Chinese Buddhism is rooted in authentic Buddhism, and that its evolution in China has not deviated from the genuine Buddhist doctrines.

Through books and teachings, Master Yin Shun actively spread the Dharma and strove to attest that Mahayana Buddhism is Buddha’s Dharma. Without contradicting Mahayana, he set out to uphold, while promoting it, that its growth is meaningfully connected to what Buddha himself preached. The master was not trying to suggest that Mahayana Buddhism was anything less important. Rather, he stressed Mahayana for sure is founded in Indian Buddhism, and that Buddhism cannot well ignore the historical Sakyamuni Buddha.

Here, I wanted to share with you my personal experience. When I was preparing my master’s thesis, I read Master Yin Shu’s works and had many questions for him. I finally decided to make a trip to Taiwan and visit the master, and there I was lucky to be able to learn under his daily guidance. He told me that I was on the right track and advised me to above of all thoroughly study Yogācārabhūmi Śāstra and Śāriputra Abhidharma Śāstra.

Currently, Buddhist students follow tradition at school by studying a particular sect. In contrast, Japanese Buddhist scholars have no such limitation, but they often become accomplished Buddhists. Several Japanese masters are experts in Pali, with their research work tracing early Buddhism. Kogen Mizuno and Akira Hirakawa, for instance, were both ordained monks, following respectively the Sōtō school and the Jōdo Shinshū school (also known as True Pure Land Buddhism), and the latter a specialist in Abhidharma as well. They pursued lifelong learning to acquire knowledge that goes far beyond their own sects. Kogen Mizuno specialized in Theravada Buddhism, compiling a Pali Dictionary, A General Index to Works in Theravada Tipitaka and a Pali Grammar. He must have taken an incredible amount of time and effort to complete these works, being clearly aware of their significance that whether it is Pure Land, the origin has to be in Buddha’s teachings. (To be continued in Part II)