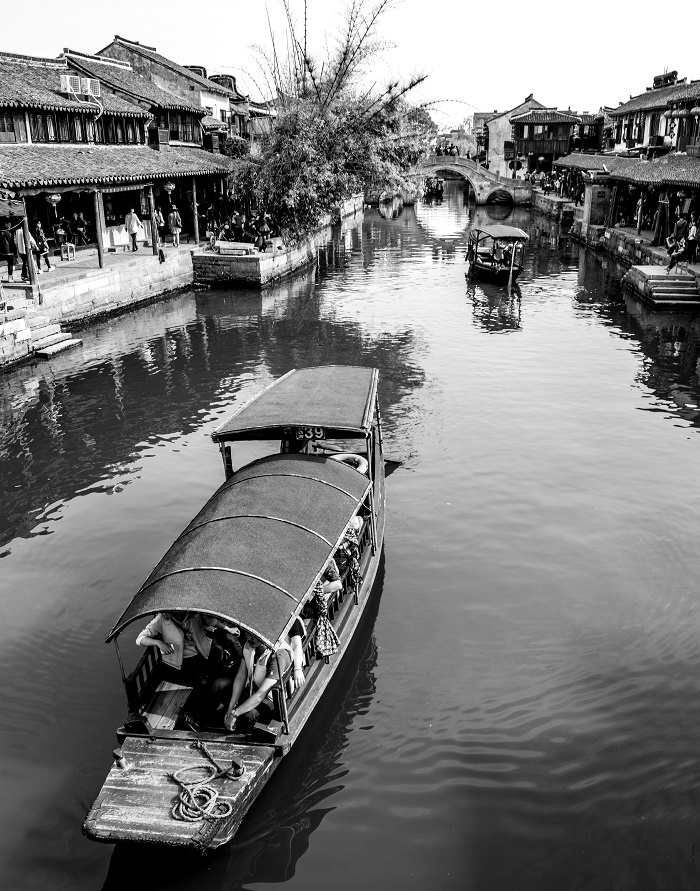 “A worldly life is like a boat with a low awning.

To the west coast or the east, it keeps moving.

Many a time the crescent moon becomes round,

and the wind blows north after it goes southbound.

Year after year, no one is forever good to get along.

When in late spring no flower stays red for long.

Right or wrong, what one hears one is to tolerate.

And also, act half demented and half deaf-mute.”

Life is like a lone boat with a small canopy to shelter from wind and rain. In the sea of time, it drifts along with billowing waves. Sometimes things are joyful like a full moon, and sometimes they turn sorrowful like a new moon. When things are well, they are like a warm southerly wind, and when they are adverse, they behave like a harsh northerly wind. All dharma is impermanent phenomena. Humans go through birth, ageing, sickness and death, things evolve over germination, existence, termination and emptiness, and the seasons cycle through spring, summer, autumn and winter.

Thus, the above poem says, “Year after year, no one is forever good to get along. / When in late spring no flower stays red for long”. And finally, the poet summarizes this way his personal experience in endurance and humiliation, “Right or wrong, what one hears one is to tolerate. / And also, act half demented and half deaf-mute”.

This poem, containing words of advice and caution, was written by Tang Yin (1470-1523), a writer of Ming dynasty (1368-1644). Better known as Tang Bohu, he was famous in Chinese literature as a talented scholar from Jiangsu of eastern China. Not only was he a writer, painter and calligrapher, but he also had a deep understanding of Buddhism, calling himself the Six-metaphor Lay Practitioner.

Why six metaphors? According to legend, the poet loved to chant The Diamond Sutra. One day, he came to a gatha in Chapter 32, “Every conditioned dharma is like a dream, an illusion, a bubble, a shadow, a dewdrop or a flash of lightning, and it should be viewed as such”, and all of a sudden, he had an awakening. It turned out to him that all things in the world arise when karma gathers, and scatter when it dissipates. They are transient, impermanent and empty without intrinsic nature, just like the six metaphors referred to in the sutra, i.e., all dharmas are like dreams, illusions, bubbles, shadows, dewdrops and lightning. From then on, he decided to call himself the Six-metaphor Lay Practitioner.

As well, legend goes that when he was twenty-nine years old, the scholar came number one in a provincial examination, which meant he had a government career well in sight as he had wished to pursue. However, when he went for the next, national-level competition, he was disqualified for his implication in a matriculation corruption case. Thereafter, he gave up all hope for a distinguished career as well as pursuit of fame, and began to wander throughout China’s scenic mountains and rivers, while at the same time devoting himself to calligraphy, painting and poetry. As a result, he ranked in art among the top four scholars of the school of Wu in eastern China.

The scholar wrote another poem, coincidentally resembles a modern limerick in vernacular Mandarin.

“To live seventy years is a rarity.

For the first ten years I was little,

And for the last ten, I am senile.

In between, of the remaining fifty,

Half the time I spent in dark nightly.

So, my life counts for no more than twenty-five years.

That, plus the so much rat race that one also endures!“

This poem laments the short time enjoyable in life, and anyway, most of it people spend in making ends meet or hunting for a career. He reckons that even if one does reach seventy in age, with the first ten years being young and ignorant and the last ten years ageing, half of the fifty years in the middle passes in the dark. Thus, out of the seventy years there is only twenty-five years of life to be possibly enjoyable. Life is indeed, he writes, brief and full of suffering.

Although the Ming dynasty genius had an ungratifying life, he excelled in artistic and literary pursuits. His landscape painting, in particular, best represents the legacy of the renowned Wu school of Jiangsu. He lived on selling fine art all his life, and never went into business or government. Accordingly, the life he lived was a dignified one, and he was happy to be poor and not greedy for a single penny not belonging to him. He also attached great importance to karma, which sentiment is well captured in another of his poems,

“Fond of neither alchemy nor meditation,

I am not in commerce, or land cultivation.

I paint mountains for sale, if I have the time.

And never have I spent an ill-gotten dime.”