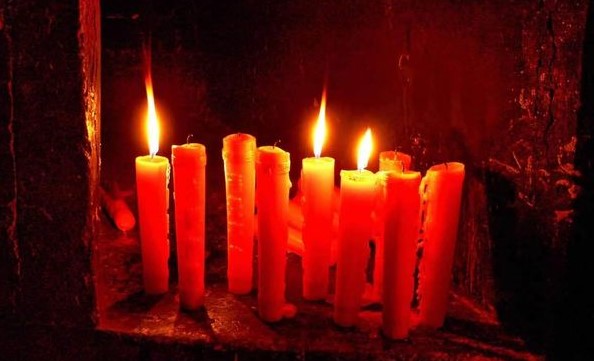 Ullambana, All Souls Day, is not only a festival to save the spirit of departed parents,

it also reminds you to repay their kindness with filial piety.

Remember that filial piety is a virtue of the Chinese people, and an

Ullambana, is celebrated on the fifteenth day of the seventh lunar month every year. Its original purpose was to put on a vegetarian feast that day, also known as Buddha’s Joy Day, to support the sanghas in all the Buddhist community. Gradually, however, it lost this original intent, and instead of making offerings to monks, it began to offer as well delicacies, funerary money and other sacrifices to ancestors as a way of expressing filial piety and, with compassion, feeding lone, starving souls of the dead. Consequently, it has turned into a secular folk custom with a broad appeal and profound impact. There is a reason how the festival as it is has come to be.

The textual origin of the festival is found in Buddha Speaks Ullambana Sutra. The Sanskrit word “ullambana” means “hung upside down”, a metaphor for the suffering of the dead, depicted vicariously through the extreme pain undergone by someone with their feet up and head down. The scripture says,

“After Buddha’s disciple Mahamaudgalyayana gained six spiritual powers from meditation, he wanted to propitiate his deceased parents in order to repay their nurturing grace. He observed with his inner vision that his father had ascended to the heavens enjoying blessings, whereas his mother had fallen into the path of hungry ghosts and was not allowed to eat or drink. Seeing his mother miserably languishing in the netherworld to nothing but skin and bones deeply saddened him, so he filled the bowl used for alms with food and offered it to her, but the moment she took the bowl, owing to the hinderance from her past evil karma, the meal instantly turned into burning ashes before she took a single bite. In tears, the disciple begged Sakyamuni Buddha for a remedy to rescue his mother.

“Buddha taught him, ‘On Pravarana, the holy day of atonement on the fifteenth of the seventh month, that is, the day when monks conclude their summer retreat at the end of the rainy season, mortals provide the monks of great virtue with a hundred kinds of fresh fruit and delicacies, meals, clothing and bedding. The merit in this can be dedicated to their parents in the present and seven past lives as well as to brothers, spouses and children, to free them from suffering and keep them from falling into the three evil pathways of hell, hungry ghosts and beasts. With it, their living parents may also increase their fortune, lifespan and blessing.’

“Upon hearing it, Mahamaudgalyayana followed Buddha’s teaching. On the following fifteenth day of the seventh month, together with other benefactors, he offered delicacies and other items to the monks on their day of Pravarana……

“Buddha ordered the monks in the ten directions to first chant mantras and pray for the benefactors providing the alms, wishing their parents in past lives to be free from misery and enjoy happiness, and their living parents to grow blessing and wisdom, and only then to accept the food in alms offered to them……

“Thus, as a result, Mahamaudgalyayana’s mother was freed from the torment in the hungry ghost path on the very same day.”

Since then, all other Buddhist disciples have observed Ullambana for making offerings to the sangha, so they could rely on the power of the Three Jewels of Buddha, Dharma and Sangha to deliver their parents from afflictions. This is how Ullambana as a festival has come to be held on the fifteenth of the seventh lunar month every year.

In China it was Emperor Wu of the Liang dynasty (502-557) that was the first to hold a large-scale Ullambana. Record of Buddhas and Patriarchs in Volume 37 describes the busy scenes providing offerings to monks at an Ullambana put on by the emperor at Tongtai Temple in 538. Since him, rulers of different dynasties invariably made offerings for monks during Ullambana.

Ullambana offerings provided during the Tang dynasty (618-907) tended to be luxuriously spectacular and magnificent looking as donors would often adorn them with such precious items as the Seven Treasures, including gold, silver, lapis lazuli, crystal, rare coral, ruby and emerald. And in Volume 62, Sacrificial Offerings, of the Dharma Garden Forest of Jewels, this is how Shi Daoshi (?-683) puts it, “To grand state-sponsored temples, such as Chang’an Ximing and Ci’en…… every year they send festival offerings and musicians etc. and marshals as well…… In addition, benefactors make sundry offerings”.

As time went on, the story in Ullambana Sutra of Mahamaudgalyayana rescuing his mother was widely circulated and became known to all. Besides providing luxurious food for monks, Ullambana benefactors began to ask monks for services to redeem their ancestors over seven lives past. Thus, the ritual of feeding souls became a part of the increasingly popular festival.

From the times of the Song dynasty (960-1279), Ullambana further grew from a gala to solely provide monks with offerings into one with a rite as well that propitiated spirits of the dead, with its focus increasingly shifting to feeding the departed souls. Thus describes the Annotated Sacred Monastic Rules and Regulations According to Baizhang published in the Qing dynasty (1636-1911), “Mortals make devout Ullambana offerings to the Three Jewels on the fifteenth day of the seventh month, and at night put on a feast to feed and expiate all ghosts and spirits.”

During the subsequent Yuan (1271-1368) and Ming (1368-1644) dynasties, Ullambana evolved into a full-fledged all-souls folk festival, well reflecting the filial piety valued in Chinese ideology. Aside from offering sumptuous food and drink at sacrificial rituals, pious offspring also burned funerary money and paper ferries, and set river lanterns afloat. Burning money was to remit funds to the souls of the dead, setting lanterns afloat was to redeem the ghosts of those who had drowned, and setting ablaze paper ferries was to make their spirits ascend to the kingdom of Buddhas. Of course, such activities had little to do with Buddhism, but were a way of acting out lay people’s yearning for the deceased as well as their reverie to propitiate these souls. At any rate, they were all manifestations of filial piety, and so long as they went on safely, nobody had reason to fault them.

Then, in the following Qing dynasty, Master Yirun advocated in fact Ullambana’s dual significance, unifying both its provision for monks and propitiation of spirits, to “present offerings to the Three Jewels during the day and a feast for all hungry ghosts at night”, the detailed ritualistic observances of which he includes in his afore-mentioned Annotated Rules According to Baizhang in Volume 8, A Summary of Ullambana Rituals. At the same time, though, not many monasteries have strictly observed these rules, and among the secular masses, spirit expatiation has remained a main theme of Ullambana assemblies.

Ullambana has thus become a festival not only to commemorate ancestors, it also reminds you to repay your parents love with filial piety.

Crows know filial piety with grown chicks feeding their ageing mother, and suckling lambs exhibit gratitude by kneeling. Even animals understand how to requite their parents love with gratitude. We humans claim to be the soul of the universe. Have we practised filial piety, feel grateful to our parents, remember and save our ancestors souls with utter devotion?!

China is a nation that cherishes filial piety. It is where her traditional Three Cardinal Principles and Five Constant Virtues of ethics and morality (see Note 1) centre on, and from it have developed such values as loyalty to homeland, fraternity to siblings, righteousness to friends and benevolence to all. Buddhism teaches people to start with filial piety, maximize in action the virtues of truth, compassion and beauty inherent in the goodness of humans and spread benevolence among all sentient beings. This will be the ultimate, obliging manifestation of great compassion and mercy.

Gentle readers, Ullambana Festival provides an auspicious time to remember our ancestors and honor the Three Jewels, so that the pious one’s parents in this lifetime will increase their fortune, lifespan and blessing, and their parents from seven previous lives will be delivered from suffering to reside in happy, propitious locales. Everyone can take the opportunity to worship Buddha and chant sutras at a monastery and further their blessing and rejuvenation. Do not ever miss this opportunity!