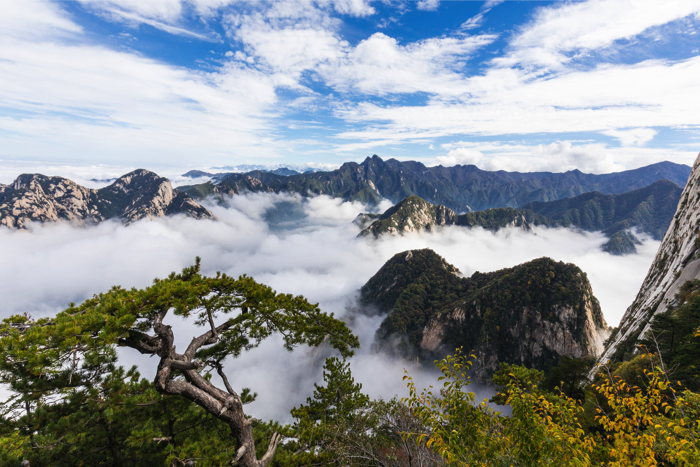 Under the pine I ask an urchin. The master, he says, is gathering herbal cure.
Somewhere up on the mountain, but whithersoever in deep clouds, no idea.

This poem, Seeking a Recluse to No Avail, was written by the Tang dynasty poet Jia Dao (779-843). He was a native of Fanyang, near what is today’s Beijing, with Langxian as his courtesy name. He had been an erstwhile monk but returned to secular life to become a disciple of Han Yu (768-824), a politician and leading writer of the day. At age fifty, Jia Dao passed the imperial examination finally and was appointed to a position in civil service. He was later demoted to chief clerk at Changjiang county, where he wrote most of his better-known poems, and for that reason he is sometimes referred to as Jia Changjiang.

Belonging to a school of the so-called “belabouring” poets, Jia Dao is known for being the source of the allusion “tui qiao”, weighing a word choice, or literally “push or knock”. The story goes that one day on the back of a donkey, he thought hard trying to refine part of a verse, “Birds rest on a tree by the pond, while the monk pushes a door under the moon”, mulling absent-mindedly over whether to use “pushes” or “knocks on”, so much so that he unwittingly got in the way of the capital chief administrator Han Yu’s honour guard (see Note 1). Upon being questioned, Jia Dao said in all honesty that he had been completely preoccupied with whether to use “push” or “knock on” in his poem and thus failed to stay clear of the official procession.

After deliberating for a while, Han Yu suggested that “knock” would be a better choice, and so the two rode back together to his official residence, where they went on to discuss more of poetry writing and quickly bonded. Jia Dao later commemorated the unique writing experience this way, “Two lines took three years to write. One recitation makes two eyes tear up.” Subsequent generations hence would refer to deliberation over precise diction as “push or knock”.

As in early years Jia Dao lived a quiet, meditative life, he had a way of watching life with a detached, aloof  mentality. Most of the landscapes depicted in his works are tranquil and other-worldly. The quatrain under discussion here, Seeking a Recluse to No Avail, is one such celebrated Chan poem.

“Under the pine I ask an urchin. The master, he says, is gathering herbal cure.” The author was calling on a hermit, and saw a boy under the pine tree, who told him that the master had gone to collect medicinal herbs. What was a hermit in ancient times? With land far more sparsely populated than today, if people were not used to life in towns and cities, or did not fancy the career of a government official, they could choose to move to a remote mountain and take on a secluded, rustic life of picking herbs, gathering firewood and tilling the land. More often than not, these folk tended to be educated and cared about ethics. The recluse here was one of these mountain hermits.

“Somewhere up on the mountain, but whithersoever in deep clouds, no idea.” The boy told the visitor that his master was in the mountains, but since it was peak upon peak shrouded in foggy clouds, he could not tell exactly where the old man was.

In four lines and twenty words, the poem uses a simple question-and-answer format to convey the hermit’s surroundings and his kind of solitary livelihood. While the words are plain and unadorned, the emotions contained in the short verse are earnest and abiding. One could read of the hermit’s perceived nobleness in the white clouds as well as his unsullied character in the pine. A failed meeting rather adds to the poet’s admiration for the lone ascetic.

“… whithersoever in deep clouds, no idea.” What an unpretentious answer fit for a Chan query! Its timelessness lies in the transcendental wisdom springing from the serene mind of an accomplished meditator. The hard-brooding poets, of whom Jia Dao was one, often advocated an unspoiled, supra-mundane Chan environment, and Jia Dao himself always maintained the spiritual vigour of a Chan monk. Thus, while the words and sentences he wrote are simple and unembellished, their artistic impact brings ethereal tranquility.

Indeed, the words “… whithersoever in deep clouds, no idea” do sound somewhat disappointing,  and yet, they make the reader probe on after the poem ends. Perhaps as a symbol of our own delusion, they point to something closely locking the entire mountain. The hermit master who went to collect medicine, clearly to help cure fellow human beings, symbolizes our true self and Buddha nature, whereas the boy in the mountain is a metaphor of our discriminating mind. Comparing the boy with the master is akin to comparing a mind of discrimination with the true mind. The boy could not truly understand the profoundness of the master, though the latter may have well taught him everything about the world. Now the boy only vaguely knew his master was in the mountains, but since the misty clouds were so thick they were completely cloaking the mountain, the boy could not give the master’s location. The hermit’s visitor, together with the boy, looked over the mountain while under the pine tree, and as long as they were patient, once the clouds and mist cleared up, they would see the hermit eventually come back.

The poet, who was seeking to meet with the recluse, now saw, of course, that his present whereabouts were unknown albeit among the dense clouds, but in the process Jia Dao’s memorable encounter and his anticipation might have implied something far more interesting.

Note 1  The capital chief administrator in feudal China was the top official of the capital city, equivalent to today’s mayor for the seat of a central or national government.