Good or Evil, A Fleeting Thought Makes All the Difference 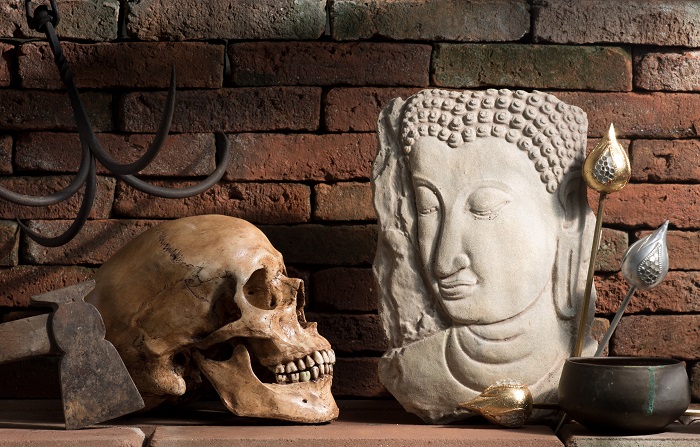 The Flower Adornment Sutra says, “If people want to understand all Buddhas in their lives past, present and future, contemplate the nature of the Dharmadhatu. Everything is created by the mind.” All phenomena in the world, good and evil, originate from mental activity. One good thought may benefit sentient beings and guide them towards Buddhahood and ultimate enlightenment. One evil thought, on the other hand, could harm them and make them descend into the three evil realms of existence of beasts, hungry ghosts and hell where they endure infinite suffering.

Therefore, we must always pay attention to our own thought and make sure it stays on the right path. If one lets it wander freely with the objective environment and get entangled in sensual desire and impurity, sooner or later they are to suffer retribution.

Eunuchs in imperial China, men castrated before puberty, were employed to wait on the royal family in the palace. Viewed as either imperiously domineering or servilely fawning and thus, a source of calamity and curse, these traitorous court officials were generally scorned and spat upon. However, among them, there were a few who did not flinch from sacrificing themselves to uphold justice for the good of their country, and because of that they have been praised in commemoration over the generations.

The infamous late Ming eunuch wielded enormous power after gaining Emperor Xizong’s favour. He suppressed dissent and persecuted even those loyal to the emperor. Many of the ministers who had opposed him were brutally tortured and executed under false pretence. In the fifth year of the Tianqi era, for example, he framed six Donglin Academy-based association members and all died in prison. They were known as the “Six Gentlemen”. The following year, he persecuted another seven members of the same group, who all ended up dying while imprisoned. These became known as the “New Seven Gentlemen”.

According to unofficial records too, among the eunuchs who used extreme torture in prisoner interrogation, Wei Zhongxian was the most vicious. Later, upon Xizong’s death Emperor Chongzhen succeeded to the throne. When he discovered Wei’s perpetration of atrocities, he exiled the latter to Fengyang in eastern China. On the way, however, the ruthless court eunuch reaped what he deserved by committing suicide. And as well, all his family were implicated and executed. Since his demise helped cleanse the royal court of treachery, it literally had the entire nation applauding.

Court eunuchs were not necessarily all misbehaving, causing harm and outrage, of course. As told by Liang Qichao’s (1873-1929) The Coup of 1898, towards the end of Qing there was a loyal, upright, undaunted man who risked his life in repeated remonstrance with the empress dowager. He was Kou Liancai the eunuch, an unlikely hero admired throughout the centuries.

At the time, Empress Dowager Cixi was the de facto supreme ruler of the empire and adamantly misappropriated hefty military funds to restore the Summer Palace for personal use, causing widespread anger among her people who were living in dire poverty. And after the 1894-95 Sino-Japanese war, the country’s fortunes dwindled further. Although no part of the intelligentsia, Kou was a fierce patriot sharing a deep concern for the peril of the nation. He witnessed it invaded by foreign powers and ceding land in war reparations, and yet the very monarchy he was personally serving was inept, corrupt and edging towards its own downfall. This filled his heart with distress.

One morning, before the empress dowager got up, Kou knelt beside her bed and was crying bitterly, which awakened Cixi. Feeling annoyed, she asked what was going on. Kou entreated, “May it alert Your Imperial Majesty but our country’s crisis is right here. Please, Your Imperial Majesty should no longer covet pleasure lest there be irreparable internal unrest.” On seeing that the words were coming from a mere low-level eunuch, she thought he was talking nonsense and ordered him to leave immediately, but thought no further about it.

When he saw that his grave concern was not heeded, Kou was determined to make it known through writing. To prepare, he went on leave and returned to his home village in Changping on the outskirts of Beijing. There, he bid farewell to his family and made arrangements to share all his savings with them as well as his fellow eunuchs. When all that was done, he submitted a formal letter to the empress dowager containing ten pleadings, including those that she return the power to the emperor, and that she not siphon state funds to fix the Summer Palace, since the money was urgently needed for strengthening armaments and helping the poor. Similarly, the rest of his petition implied further admonitions no one dared utter, which naturally infuriated Cixi. According to court rules, any eunuch found to have been involved in advisory or remonstrative acts should be immediately executed. And that was what happened to Kou at the hands of the criminal justice ministry.

This heroic deed of imploring Cixi in protest and risking Kou’s own life was for the cause of righteousness in the interests of his people. Such immortal conduct was indeed historically rare among eunuchs. By sacrificing himself to awaken his compatriots and attempting to save his country from ruin, Kou Liancai, a eunuch, is no less comparable to generations of revolutionary martyrs who have died for their motherland.

Hailed by Liang Qichao as a “eunuch martyr”, Kou was not flustered on the day of his execution. He smoothened the formal dress he was wearing, held up his chin and calmly met his death at the age of only twenty-eight. All those watching were moved to tears.

Gentle readers, as a eunuch, Wei Zhongxian indulged in selfish desire, brought sheer suffering to the people and goes down in history deservedly in infamy. By contrast, Kou Liancai, also a eunuch, made history by standing up for righteousness, his sacrifice for the country has been awe-inspiring, and his name lives on in eternal glory. Heaven or hell, the key lies in their conscious volition, either good or evil.