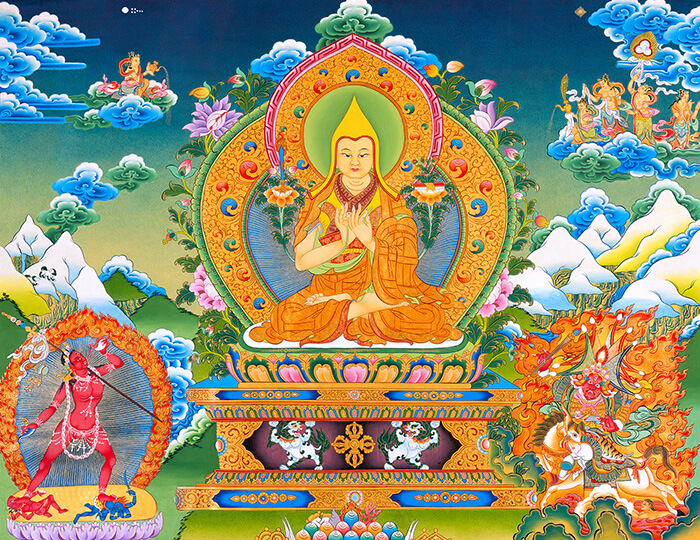 We learned from the last article that karma is not a deterministic law that the Hindus and Jains had advocated, but more like the continuous adding and tasting of new karmic ingredients in the melting pot of life. As a seed planted without water, sunshine and the right soil will never blossom into a flower, the initial karma without considering it in context of one’s intention, state of mind, present and future actions cannot account for the full karmic result of an event. This is encouraging news to all of us for the results of our past karma are not etched in stone. With new wholesome intentions and skillful actions, we can undo the foolish deeds of our past.

But before we set course on our voyage towards greater freedom and happiness, we ought to first learn some basic sailing terminology and know-how to make our journey a smooth sail. Smoothening out our karma requires that we first understand its key characteristics. In the Buddhist exegesis of the doctrine of karma, Tsong Kha Pa’s description of the four characteristics of karma offers one of the most insightful explanations, and gives us some much-needed headway into unraveling the mystery of how karma works.

Tsong Kha Pa was an eminent Tibetan Buddhist monk, philosopher and teacher who lived between the 14th and 15th century and is credited as being the founder of the Geluk school of Tibetan Buddhism. In his “Great Treatise on the Stages of the Path to Enlightenment”, he explains that karma has four general characteristics:

In simple terms, karma is intentional action. Like Newton’s third law of motion, which tells us that every action has an equal and opposite reaction, every karmic action results in a karmic effect. If you slack off at work, your boss will never give you that raise you’ve been hankering for. If you want your wife to cook sumptuous meals for you again, you had better wash the dishes next time. When isolated to a one-for-one causal relationship, cause and effect makes perfect sense. It’s when one starts to consider multiple causes, circular relationships and the span of time required for most causes to mature into their effects that causality starts turning into a mind-boggling enigma.

Figuring out the threads of cause and effect in this complex karmic brocade is almost as hard as fixing a dysfunctional family, which is really what most of us feel our lives to be like as we struggle for air in the dysfunctional waters of our society. In fact, it’s this muddling up of what leads to our true happiness and suffering in this world that is the bane of our existence. When you’ve done all that you can to to live out your end of the bargain on life’s transactions by being a responsible and virtuous human being, but still get swept away tide after tide by misfortune and calamity – this is the perennial frustration of life. Fortunately, the Buddha cleared up our doubts and frustration over this issue with his explanation of causality over the three lifetimes – past, present and future.

The Good, the Bad and the Ugly

What we experience in our current life is not just the maturation of the karmic seeds sown since childbirth, but stretches back in the continuum of time to the karma performed in our previous lives as well. This explains why some innocent children are born into sickness the very moment they enter into this world, and why there are ruthless dictators and tyrants, who remain unfettered by the law and inherit great fortunes at the expense of others’ suffering. They are the good, the bad and the ugly seeds of the past ripening into the present lifetime. And the seeds being sown in this life, they are slowly but surely being planted, but remain dormant in the loam of their consciousness, only waiting to ripen in the future.

To help wrap our heads around the lingering uncertainties surrounding cause and effect, Tsong Kha Pa stipulates for us karma’s first main characteristic: it is certain. Certain about what? The Tibetan master tells us that the one thing about karma we can be certain of is:

In other words, it is impossible for happiness to arise from unvirtuous deeds and from suffering to arise from virtuous actions. In the haze of trying to figure out the causes of your present suffering then, you can rule out the idea that it was your compassion you allowed others to take advantage of that is responsible for your current suffering. You can also rule out the possibility that your success in business comes from your willingness to feel shameless about trampling on your competitors. Simply put, Tsong Kha Pa tells us that no amount of suffering you experience can come from virtue, and no measure of happiness can spring from vice.

This principle is universal and applies even to hell beings, who despite being meted out with unbearable punishment for their wrongdoings, can still experience short bursts of pleasure in hell. For a brief moment at the end of one death sentence and before the beginning of another, hell beings experience the passing sensation of a cool breeze. This momentary buzz of pleasure does not come by accident. It is a result of their past virtuous karma maturing as a refreshing interlude between the acts of their tragedy, like a drowning person gasping for air for a brief moment before being plunged again into the bottomless sea.

Tsong Kha Pa’s first dictum on karma also excludes the possibility that happiness or suffering can result from the absence of causes and conditions, from the actions of others, from a creator God, or from the force of externalities beyond our control (Ajivika’s cherished theory). Karma can come only from one’s own volition and the thoughts, speech and actions that originate from it. It is, therefore, not a system of external causation, nor is it a mix of self-causation and external causation where some divine creator metes out reward or punishment in return for good or evil actions. It is, in its entirety, an organic system of moral responsibility where each individual is held accountable for the ethical quality of his/her actions.

What is the lesson to be taken away from Tsong Kha Pa’s first karmic tip? If we want happiness to ensue in our lives, we must be willing to replant our karmic seedbed, however strenuous the work may be, with virtuous and skillful action, and to stop watering the weeds and creepers of unwholesome action that strangle our capacity for well-being. Karma is certain, and there is no way out of it until we have attained enlightenment. So while we are still stuck in the Jumanji of life, we might as well be smart about the moves we make on the board.

The second characteristic of karma is an expansion on the first. In effect, it is its double negation that allows karma to be viewed from another vantage point: one can never experience the effects of actions not performed. If you plant apple seeds, you can only get apples trees. You will never get mangoes. Life is the same. We can never reap happiness until we start sowing the seeds for it. In fact, all that we experience through our senses is a direct result of our past karma. Accidents and flukes, scapegoats and free riders – they are nothing more than fictional terms we have created in our vocabulary to show our ignorance of how the world functions. In reality, all the events and activities in our lives are defined by our karma, and it is also through karma that we can change how we experience the world.

Reaping What You Sow

There is a story in the Mahayana tradition that illustrates this point. During the Buddha’s time, there were two brothers. Though they were both ordained as bhiksus (Buddhist monks), their views diverged when it came to the practice. One tirelessly devoted himself to merit-making, performing the toughest labor no other monk was willing to do and dedicating all his remaining time to helping the poor and needy. But he had no interest nor time left to practice the Buddha’s teachings. His brother, however, focused wholeheartedly on meditating and cultivating wisdom and soon attained arhatship. When the both of them reached old age, the first brother passed away and was reborn in the king’s palace as a royal elephant. Like Ganesh, he was honored by the king and his ministers with only the finest food and luxuries, and was adorned from ear to toe with the most resplendent jewelry. In contrast, his brother, who was still living, despite being an arhat, could not muster even a single grain of rice when going on his alms round. One day, weak and emaciated under the scorching rays of the noontime sun, and without any food in his bowl, he sat in meditation. Overcome with a pang of nostalgia for his brother, he used his divine eye to find out where he had been reborn. When he saw that his brother had been reborn as a royal elephant enjoying the fruits of his labor from his previous life, the arhat sighed and uttered the following four-line verse:

“Sowing merits but without wisdom,

The great elephant bejeweled with the pearl necklace;

Cultivating wisdom but without merit,

The arhat receives no alms.”

One can never experience the effects of actions not performed. The first brother sowed tremendous merit by devoting his life to the service of others, but failed to cultivate any wisdom, resulting in a lowly rebirth as an elephant albeit one living in the lap of luxury. The second brother, while being an arhat, failed to sow the merits providing him with alms, and as a result, lived under severe physical hardship. This story, besides teaching us that both merit and wisdom are indispensable on the path, also tells us that cause and effect is not only very real, but works with as much precision as a surgeon operating with a scalpel. Causes themselves can never interbreed to create unrelated effects, just as much as a dog and a monkey will never breed a cat. If you don’t sow the exact causes and nurture it with the right conditions to bring about a particular result, it will never come. Tsong Kha Pa’s second tip on karma serves as a valuable reminder to us that the desired effects of our karma can only come when the right actions have been performed.

In our finale on karma in part three, we go into detail on the final two characteristics of karma and how we can use them to master the karmic process and live with more freedom and happiness.

One response to “Karma: Part II”