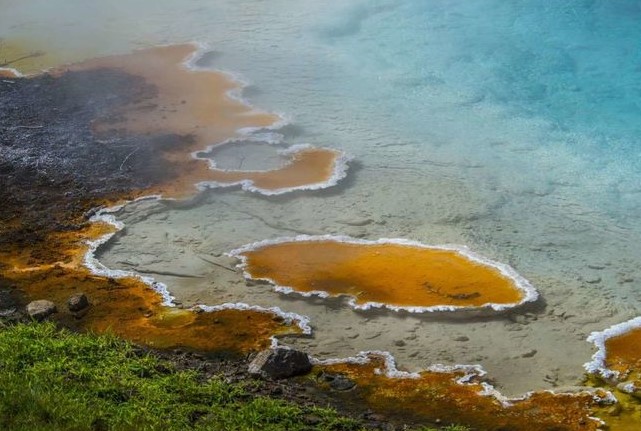 At sunset, an easterly wind resents the birds cawing, and flowers drop like those from the tower falling.”

The said garden was a villa belonging to the infamously rich Shi Chong (249-300) of the Jin dynasty (266-420). Centuries later, when Du Mu visited, seeing the formerly extravagant country house was now no more, he thought about those who once occupied it and, swept by emotions, sighed that splendor and grandeur was indeed but a dream. Those falling from the tower referred to in the poem were all Shi’s concubines and female entertainers. Although pampered with luxury and decadence, they were unhappy and depressed by the constant infight among them for the favour of their master, and many sadly jumped to death from the top of the villa.

Shi could have been the richest among officials in Chinese history. At the time of Emperor Wu of Jin, he was granted the title Marquis of Anyang Township and reached the position of Attendant in Waiting for the Emperor, but in private, he was also in business with merchants trading overseas, and so as his family fortune spiralled, he became the wealthiest man in the country. However, his lordly life was also getting increasingly licentious and dissipated, to the point that he loved competing with other officials and moneyed men to see who was richer.

He then proceeded to build a villa in Anyang, central China and named it Golden Valley Garden. With soaring towers, carved beams and lavishly gilded pillars, it was grand and luxurious, and inside it were kept hundreds of concubines and maidservants, who provided nightly live entertainment and raunchy rendezvous, and dozens of chefs who cooked up all sorts of juicy delicacies for daily feasts and bawdy drinking bouts. Thus, in indulging himself, Shi led a remarkably profligate, dissolute life, and no wonder the extent of affluence made the common folk envious.

At the time, Wang Kai, a nobleman and the empress’s younger brother, rose to the position of major general, and was favoured by Emperor Wu. With such powerful backing, he amassed great wealth through exploitation and expropriation, and soon ranked with Shi Chong as the two of the most affluent men in the land. To prove who owned the most wealth, they tried to beat each other for the highest degree of luxury and decadence they could afford.

Believing that he already had unmatched fortune, Wang used very expensive malt sugar to clean kitchen utensils. Yet Shi, not to be outdone, burnt even more precious paraffin wax for firewood. And when Wang put up purple-gauze tents twenty-kilometres long while travelling to shield his carriage from the sun, Shi built tents made of brocade stretching twenty-five kilometres.

Their competition in riches involved Emperor Wu too, who had Wang Kai’s back and repeatedly provided him with funds for him to win. Once he gave Wang a tree-shaped coral more than two feet tall, which Wang showed off to Shi, convinced that he would surely beat him this time. Shi took a quick look and, unexpectedly, smashed it into pieces with an S-shaped iron rod he was carrying as a good-luck charm. Assuming Shi was jealous of his treasure, Wang flew into a rage and sternly approached him to settle accounts. Little did he expect that Shi ordered his aides to bring out all of the corals he owned. There were not one, not two, but six or seven of them all measuring over four feet tall, among the countless corals as beautiful as Wang’s. And Shi offered to let him choose any one from them as his compensation. Dumbfounded, Wang had to courteously thank him before retiring ignominiously. After that, no one dared to compare wealth with Shi, and his reputation for owning the greatest fortune thus stuck and spread throughout the nation.

Gentle readers, such wicked extravagance was a despicable act by a very few humans, and remember that in comparison being wasteful is nevertheless a minor matter. Once spread, the pursuit of fame and fortune robs people of good conscience, makes them covet a life of indulgence and decadence, and spoils social morals. Furthermore, using monetary power to compete for luxury and vain and being a squanderer is the least advisable. If the rich pay back to society, not only will it benefit the poor, but it will promote a spirit of mutual assistance.

A few years later, however, framed by fellow officials, Shi was deprived of his post by Sima Lun, Prince of Zhao, and ordered to die with all of his family. When brought to the execution site with them, he bellowed, “The lot of you, lackeys! You are jealous of my wealth. That’s why you framed me!”

Hearing this, the execution warden sneered, “Since you knew that enough wealth can trigger misfortune, why did you do all you could to amass it? You didn’t use money to benefit folks in your community. Instead, you were loose and immoral to the extent possible, and you only knew how to enjoy yourself. This retribution is what you really deserve!”

Shi Chong is hence notorious in Chinese history for flaunting wealth, bringing death and destruction on his entire family and himself. Karma does not come up short by one inch!

Zhe Xiang used riches to increase virtue for his family

“A family given to good for sure have fortune to come.

A family given to no good for sure have misfortune to come.”

This popular dictum known to every household is a quote from the Book of Changes expounding morality and ethics conveyed in the “kun” hexagram, a trope for submission symbolizing the earth. It remains true in Chinese history that there have indeed been many an occurrence time and again proving the causal truth contained in it.

Shi Chong of the Jin dynasty, as briefed on above, was rich but self-indulgent, and caused misery to all of his family. On the other hand, Zhe Xiang of the Later Han period (947-950) during the Five dynasties, accrued virtue with his wealth and benefited his offspring, as we will learn next.

Zhe’s ancestors left him a large family estate, and his servants alone amounted to over 700. Even so, he did not live in dissolution because of his massive wealth. On the contrary, with a compassionate disposition, he refrained from killing while often setting live animals free, and supported the poor and needy. Whenever others were in need, he would try his best to help, whether it was someone he was related to or not, by providing rice, clothes, medicine and access to medical care, organizing schools with free tuition, and helping the widowed and orphaned. Thus, Zhe did his utmost to do good, and after just a few years, half of his family fortune had been spent, and yet he still would not slacken his work on assisting the poor and destitute.

Relatives and friends feeling concerned would urge him, “With so many people in your family you have a huge daily expenditure to cover. In fact, you should work harder at growing your wealth. But why do you instead use most of your fortune handed down from your ancestors to help other people? You should realize that you can’t help them forever, and should rather plan for the future of your own children and grandchildren!”

To them, Zhe replied, “I am sincerely grateful for the concerns you have, but it is in the very interests of the future of my descendants that I am now giving away money to help the poor. Remember that in this world all things rise and fall. Once full, the moon begins to wane, and in bloom flowers begin to wither. Even heaven and earth cannot escape the cycle of growth and decline, let alone human affairs. In short, the biggest taboo for all things is being at their maximum. My family has been well off for generations, and now in my hands, it may be at its richest. I know I have no sufficient virtue to sustain the family fortune, and when I look at my children and grandchildren, they are mostly mediocre too. Knowing that those who are rich but unkind will be condemned, I dare not leave them much assets, for fear of maxing out their luck. Since I now have the money in my control, I am doing my best to relieve poverty through philanthropy and accumulate virtue for my offspring while also making up for my own deficiencies. This is indeed a good remedy to avert misfortune, and a smart recipe to preserve my family estate.”

Ladies and gentlemen, according to the karmic principle of rewarding goodness and penalizing evil, amassing wealth for one’s offspring does not measure up to accumulating virtue for their benefit, as the accrual of riches in the family easily leads to vain and indolence on the part of the next generation, so they become lazy and unenterprising. In sitting idle and squandering away their inheritance, some may even go after dissipation and licentiousness, and by then no amount of family fortune would be enough to sustain them. Even if the younger generation is frugal and modest, their wealth will still not last long as a rule. Whenever there is war, natural or man-made calamity, one’s fortune could come to nought at any moment. Wealthy people thus must not indulge in pleasures themselves or attempt to benefit none other than their own family. They should requite what they have back to society to benefit their fellow human beings.

Eventually, Zhe Xiang lived to be in his nineties. One day, he invited all his family and friends to a banquet and told them that he was about to die. Later that day, he died without illness, and generations of his descendants continued to enjoy prominence and prosperity.

This story is found in A Historical Account of Incidents Involving Divine Impact.