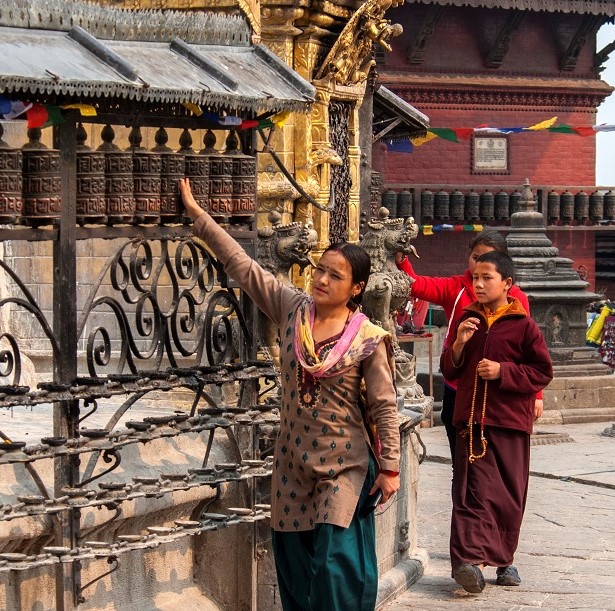 Since ancient times, Lamaists have long upheld the mantra as the heart mantra of Avalokitesvara Bodhisattva, something used by Amitabha Buddha in praise of the Bodhisattva. Tibetan Buddhists chant it in a hope to eliminate misfortune and eventually reach Pure Land. According to the Tibetan Chenrezig classic Mani Bkah Hbum, it is a source of relief, salvation, wisdom and joy, and it has been ever popular with monastics and the lay alike.

The first verse of the Mantra of Avalokitesvara Inspiration chanted in Chinese temples every morning is the very Six-syllable Brilliant Mantra. Among the many Chinese Buddhist scriptures, the most detailed explanation of its origin and merit is found in the Mahayana Sublime Treasure King Sutra, translated by Devasantika (?-1000), a monk from India, during the Northern Song dynasty (960-1127). It describes Avalokitesvara Bodhisattva’s great power. In Volume 4, the sutra says that anyone who adheres to chanting the mantra can “be associated with inconceivable, boundless samadhi, that is, with anuttara samyak sambodhi, receive deliverance, view the land of Nirvana, eliminate greed, anger and other mental suffering, achieve perfect merit from the Dharma, cease transmigration, clean out the realm of Naraka, save animal beings, and achieve the full access of the Dharma, capable of delivering endless speeches filled with Buddha’s prajna”. Thus, infinite is the merit to be found in chanting this mantra.

The Vedas, the oldest scripture of Hinduism, and Nada Yoga, an ancient Indian metaphysical school studying the original sounds of heaven and earth, both maintained that sounds human beings utter with utmost sincerity produce in turn unparalleled energy with divine dynamism, which are more subtle and profound than would words of a mantra when deliberated by a deluded mind contaminated with attachment both within and without. As a rule, of course, Chinese Buddhist scriptures in general do not explain the meaning of a mantra. This may be because the translators were well aware that when chanted, the reverberation and resonance which a mantra brings on have an unbelievable audio impact often exceeding what a textual message would convey, so the sounds of a mantra need not be transliterated to avoid clinging by language that could hinder a pure mind.

That said, in recent years as many Buddhists in North America have been studying Sanskrit, the textual meanings of various mantras have been made somewhat accessible. In the meantime, people also feel eager to have these meanings discussed and explained, to add to the delight in their chanting. I believe that as long as one does not cling to the mere words, having some idea of what a mantra means could help make practitioners more confident. Therefore, to share with the readers, I will try to explain what each of the sounds in the Six-syllable Brilliant Mantra might signify in the following:

Om: the most sacred sound in the universe, indicating taking refuge, dedication, the Three Bodies of the Buddha (dharma-body, reward body and transformation body), awe and apprehension. It is the primal source of all sound and the root of all merit and wisdom. According to Tantric scriptures, a mere utterance of this sound enables the practitioner to gradually leave suffering in the Three Realms and Six Paths of Transmigration to achieve anuttara samyak sambodhi. That is exactly why most mantras start with this sound.

Mani: a rare treasure, the maṇi-jewel. Buddhist literature makes many mentions of its special merit, such as cleansing and illumination, perfection in many forms, being able to cure all diseases, and counting among the seven treasures of the Holy King of The Wheel. The lustre of the maṇi-jewel, a metaphor for the Buddha nature of all beings and containing all virtue, remains constant with the sacred and mortal alike. But the glorious maṇi-jewel has long been polluted by dust, meaning that the minds of all beings have been deluded. However, when a mere mortal practice the dharma and become enlightened, it is as if the maṇi-jewel regains its original glory.

Padme: a pure lotus flower. According to Volume 9 of The Cloud of Jewels Sutra (also known as Ratnamegha Sutra), the lotus grows out of mud unstained, and its sweet smell spreads afar, which pleases those who see it with an auspicious omen. Mud being figuratively an evil world with five types of turbidity, the lotus symbolizes purified activities produced by the body, mouth and mind. That is, when a practitioner’s behaviour, speech, and thought come to be as pure and immaculate as a lotus flower, the maṇi-jewel or Buddha nature residing in his mind manifests itself.

Hum: the seed of all Bodhicitta, the wonderful entity of the Thus-come (tathāgata), and a source of countless merits.

Together, the sequence of the six syllables Om Mani Padme Hum means “In utmost reverence to the sacred mantra! All beings have Buddha nature and, just as the rare maṇi-jewel, as long as they purify their body, mouth and mind with perseverance like the pure lotus flower, they will reveal their true nature and become enlightened. This is the fundamental, amazing essence of enlightenment for all Buddhas!”

Whatever comes into the ear makes sound. The Buddha’s cause of compassion and enlightenment for sentient beings is accomplished through words, magical powers, repentance ceremonies, and through food, clothing, bedding, medications and so on. Collectively, these acts are known as “Buddha work” (buddha-kārya). When sound alone is employed in the saha world in Buddhist preaching, however, it is termed “Buddha work of sound”. Indeed, mantra chanting is Buddha’s incredible work of sound, the status of which is beyond discrimination by the human mind, nor could it be adequately accounted for by way of language or thought.

In Volume 4 of The Mahayana Sublime Treasure King Sutra it says, “Tathagata Upon a Lotus Flower said of the dharani merit in the Six-syllable Brilliant Mantra, ‘Good Man! All dust particles I can count. Good Man! To chant the dharani of this mantra once is to attain merit I cannot quantify.’” This is how immense the merits in chanting this mantra is, one that even Buddha cannot do justice.

The Six-syllable Brilliant Mantra incorporates various wholesome approaches and wards off evil ones. Make a point of chanting it every day with enduring diligence and sincerity, and it is sure to bring one wonderful, inconceivable meritorious rewards.