Tianlong Babu: The Eight Legions of Devas and Nagas 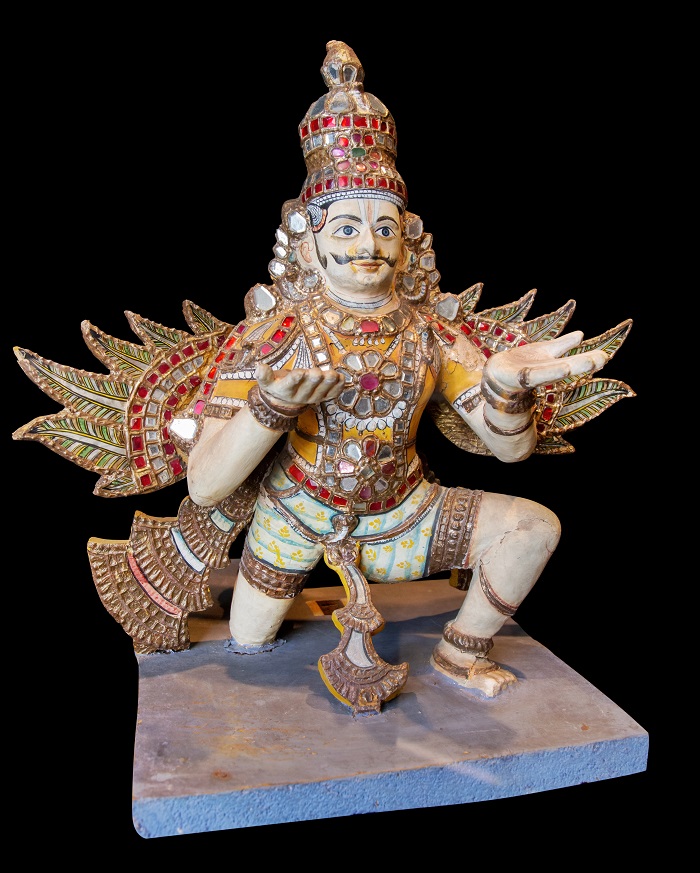 The Chinese designation Tianlong Babu (天龍八部) in Buddhist texts, literally, Heavenly Dragons in Eight Divisions, refers to a group of warriors and generals that protected the Dharma, often known collectively as the Eight Legions of Devas and Nagas. Coming from the word Astasena in Sanskrit, the term appears in many of the sutras and treatises, such as The Lotus Sutra, The Sutra of Manjusri’s Questions, The Great Golden Peacock Queen Dharani Sutra, The Prajna Sutra for the King of Nene Protecting the Kingdom and Mahayana Samgraha (The Mahayana Compendium). They feature details of the group’s name and membership. The Southern Song dynasty (1127-1279)  compilation Notes on the Translation of the Tripitaka includes their visual images as well. And it is said that the Dharma-protecting octet often followed Buddha around as he went on tour to preach, and thus they make appearances as an assemblage in many of the scriptures.

As celestial beings, Devas resided in a state of purity, light and holiness belonging to a heaven called Bhumyavacaradeva of the Desire Realm on the top of Mount Meru (see Note 1). As one of the heavens, there was only joy without suffering that is prevalent in the human world. Devas had clothes when they thought of them and food when they wanted to eat, and all their desires were thus satisfied. Ordinary folk might imagine heavens to be a realm of sublime bliss, the most ideal place for humans to go to upon death. In Buddhism, however, heavens are still one of the six pathways of existence marked by transmigration (see Note 2). Devas, of course, revelled in celestial joy and yet there were limits, and they had not escaped the reaches of rebirth. Once these limits were exhausted, they would once again be placed in transmigrating reincarnation into one of the six existential pathways.

The Sanskrit word Naga means dragon, one of the four spiritual animals popularized by Chinese classics that include the unicorn, the phoenix and the tortoise. Dragons are said to be a mythical, divine creature adept at transforming its body into many different forms and appearances, sometimes simply into thin air. There are various types of dragons too, such as the cosmic winged serpent that guarded celestial palaces, the marine tutelary that protected the court of the Dragon God and was fond of making billows, a clandestine angel that safeguarded treasures and the precipitation deity that soared through clouds to dispense rainwater. The dragon’s blessing is said to be immense and so is its karma. It is believed that a practising Buddhist constantly given to anger might find joy and gain samadhi when alive, but could fall under the dragon’s spell upon death.

Yaksas can be further divided into wicked ones that brought harm and benign ones that defended the Dharma. For example, the face-burning guru introduced in Ulkamukha Preta Sutra, although hideous in appearance, was in fact a benevolent Yaksa and an incarnation of Avalokitesvara Bodhisattva.

Gandharvas are gods of incense who fed on scents. They were originally deities who played music in front of Sakra, Lord of the Devas. Still possessing desire, the lord had a passion for music. It is said that as soon as he lit a stick of incense, Gandharvas would start playing music upon catching its scent. According to legend, they resided in a Vajra cave at the southern end of Mount Meru and were able to fly freely in the void, hence their alternate name Apsara, or aerial celestial fairy.

In Sanskrit the word Asura usually carries three senses: non-celestial, undignified and no wine. Why non-celestial? Because Asuras had the blessings of a celestial being, but supposedly did not have their virtue. Why undignified? Because female Asuras were born to be beautiful and graceful, but the males looked ugly and lacked dignity in stature. And what about no wine? Asuras were innately natural wine drinkers. Once, not able to find any spirit to enjoy, some of them conceived a plan that would use their supernatural power to turn sea water into a pond of wine. However, because of a unique aquatic karma, they failed to distill wine out of the sea water. In a rage, all Asuras gave up drinking. Hence the appellation “no wine”. Asuras possessed a strong sense of aggression and suspicion, were combative and often fought with Sakra, Lord of the Devas.

The Sanskrit word Garuda means a giant predatory eagle with an enormous wingspan and golden feathers.  As the king of birds, it fed voraciously on dragons. Once, the Dragon God requested assistance from Buddha, who gave him a robe as protection against their attacks. And when the eagle lost its primary food source, it came to Buddha for help, too. “The World’s Blessed One has saved the dragon but ruined me. How am I to survive now?” Said Buddha in reply, “In future, when monks eat, they will chant a special mantra to provide food for you.” Thereafter, whenever monastics take a meal they recite the verse, “Great Golden-winged Bird, ghosts and deities in wilderness and Raksasa mother and son: I hereby offer nectar to you all”. In this way, they routinely support Garuda together with all lonely ghosts and the Raksasa mother and son with seven grains of rice. In order to express its gratitude, Garuda the golden-winged eagle hovered over Buddha’s head all day in his protection and served as his guardian.

The Sanskrit word Kimnara denotes a demigod part human, part divine. Indeed, with a human body but a single horn on its head, it did look somewhat like a human but was not entirely so, hence its epithet “questionably humanoid”. Like Gandharva, Kimnara was also Sakra’s celestial musician, with the former playing worldly music, whereas the latter making divine music.

Mahoraga is in Sanskrit a creature that walks on its big belly, and more specifically, a giant serpent that moves on the side, sometimes considered an earth dragon as well. All practitioners who break precepts by vicious fawning, constant agitation or scanty provision of alms may descend into being a python deity, and yet Mahoragas were deified protectors of the Dharma.

Overall, Tianlong Babu, or the Eight Legions of Devas and Nagas, consists of Devas, Nagas, Yaksas, Gandharvas, Asuras, Garudas, Kimnaras and Mahoragas. These eight groups of divine beings all assembled under the Dharma to serve as its guardian protectors, and thus whenever Sakyamuni Buddha preached the Dharma, the celestial tutelary patrons were always purposely convened among the audiences.

Note 1  Desire Realm: The hierarchical structure of the universe in Buddhist cosmology comprises the Desire Realm (Kamadhatu), the Form Realm (Rupadhatu) and the Formless Realm (Arupyadhatu). These three realms are also known as “Triloka” or The Three Worlds. Within the Desire Realm there are six heavens, the first two of which are located on Mount Meru, and other the four are in the sky above. Rebirth into one of these heavens is a result of virtuous deeds done in the past.

Mount Meru: Also, Mount Sumeru, name of the mountain situated at the centre of the world in classical Buddhist cosmology.

Note 2  Six pathways of existence: Heavens is only one of the six pathways for someone in transmigration. The other five are those of humans, Asuras, hungry ghosts, animal creatures and hell.