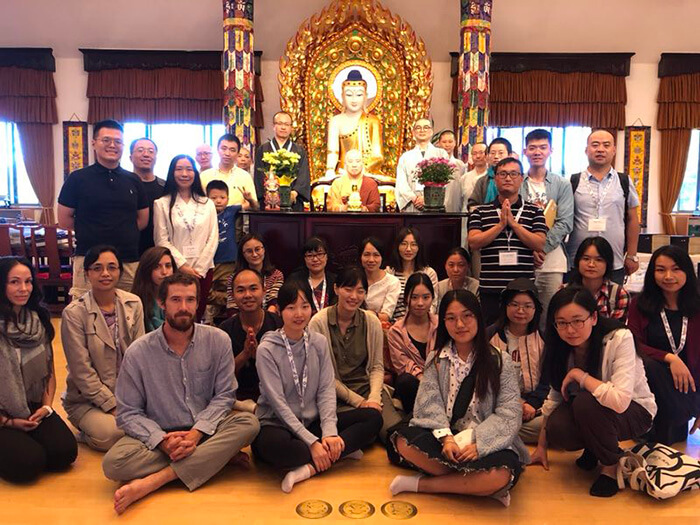 A group of over 30 international Buddhist scholars attending academic activities at the University of British Columbia toured the International Buddhist Temple on August 6, 2018. The visitors expressed their admiration and praise for the Temple’s architecture and management as well as its collection of rich Buddhist art.

The visiting Buddhist scholars came from many places around the world, including Canada, the United States, the United Kingdom, France, Israel, South Korea, China’s mainland, Hong Kong and Taiwan. Among them were well-known researchers and academics from Harvard, Yale, Oxford, Peking University and University of the West as well as students from many universities. They were hosted by Venerable Shan Ci, Venerable Shan Ru and Venerable Hong Yao.

After touring the Temple’s serene garden and Seven Buddha Hall with its exquisite porcelain mural, the guests worshipped the Buddha in the Grand Hall, where they marveled at the magnificent Buddhist art in the buddha statues and arhats’ mural. Then they went on to the Meditation Hall to meet the abbot, Venerable Guan Cheng. Using both English and Mandarin, the Venerable introduced the cardinal principles for practicing Buddhism, i.e., keeping precepts, observing the teachings of the classics, taking introspection as the key and pursuing Pure Land, and conducted lively discourses on Zen, Chinese Buddhism and its cultivation.

Following that, Venerable Guan Cheng invited the guests to lunch at the Five Contemplations Hall, and to an experience of the Buddhist ritual for Five Contemplations on Meal Offering. During lunch, the Venerable shared teachings and responded to the many enthusiastic questions from the guests on life and Buddhist philosophy, encouraging them to go beyond textual studies by integrating Buddhism into life and promoting the Dharma through personal action.

During the tour, the honoured guests had the good luck to view a 300-year-old rare ancient book – an original hand-written copy of A Three-part Collection of Dharmagupta Vinaya with Annotations by Bhikkhu Tainin in the Hall of the Jade Buddha among other Buddhist works of art held at the Temple. They praised the elegance of the Temple’s buildings, its fine management and the rich Buddhist relics in its collections. After their visit, several graduate students who will stay on at the UBC for further studies said they hope for more opportunities to hear teachings from Venerable Guan Cheng, and also to volunteer at the Temple and participate in its meditation practice.