At the invitation of Lian Shan Shuang Lin Monastery, the Buddha of Medicine Welfare Society and Tse Tho Aum Buddhist Temple, Venerable Guan Cheng gave Dharma talks in Singapore in late June and was keenly received by captivated audiences.

On the four nights from 27th to 30th of June, Venerable Guan Cheng held a series of talks on Happiness Comes from Nurturing the Mind at the newly-built Virtue Hall of Shuang Lin Monastery. The talks were given in English, Mandarin and Cantonese. Participants included the sanghas, lay Buddhists, Buddhist scholars as well as college teachers and students. All the talks were packed with attendees who vied for answers to their questions.

Revolving around the theme of “Happiness Comes from Nurturing the Mind”, the Venerable discussed purposes of pursuing Buddhism, where mental suffering comes from, and how to effectively tackle it by cultivating meditation, examining both the correct attitude and feasible methods of practicing Buddhism. He also gave a rationale for Pure Land Buddhism.

On his trip, the Venerable was deeply impressed by the audience’s dedication to seek the Dharma. They not only seized every opportunity to ask questions, but not even one person left the premise early either. Among the attendees, over thirty percent had either heard or seen his talks online. Even after the Venerable had left when the talk ended, people still lingered not wanting to leave. The commitment of enthusiastic, hardworking volunteers was another highlight on the tour, some of whom had to take leave from work so they could participate.

One attendee especially wanted to thank Venerable Guan Cheng in person. He said that he had once suffered depression due to illness but was fortunate enough to discover the Master’s Dharma talks online and watched him every day, which encouraged him to face his illness and seek treatment. In this way he felt a big debt of gratitude owed to the Master for helping him overcome the biggest obstacle in his life. He currently works as an airline pilot.

Many listeners said that the enlightening talks heard in different languages and dialects filled them with Dharma joy and best met their needs. Other participants said that they had had the good fortune to connect with the Master on the Internet and had planned to travel to Canada to meet him, and yet before they knew it they were able to realize their dream in Singapore. However, they still hoped to travel to Richmond, British Columbia in the future to spend more time with the Master.

In addition to the Buddhist talks, organizers also arranged a get-together where the Venerable met with and heard from young people and lay Buddhists respectively to answer their questions.

Lian Shan Shuang Lin Monastery is known as Singapore’s premier Buddhist temple with a history of 120 years. Venerable Guan Cheng’s Dharma talks were the very first Buddhist event to take place in the monastery’s newly completed Virtue Hall, where the more than 600 seats were fully packed and extra seats had to be added. 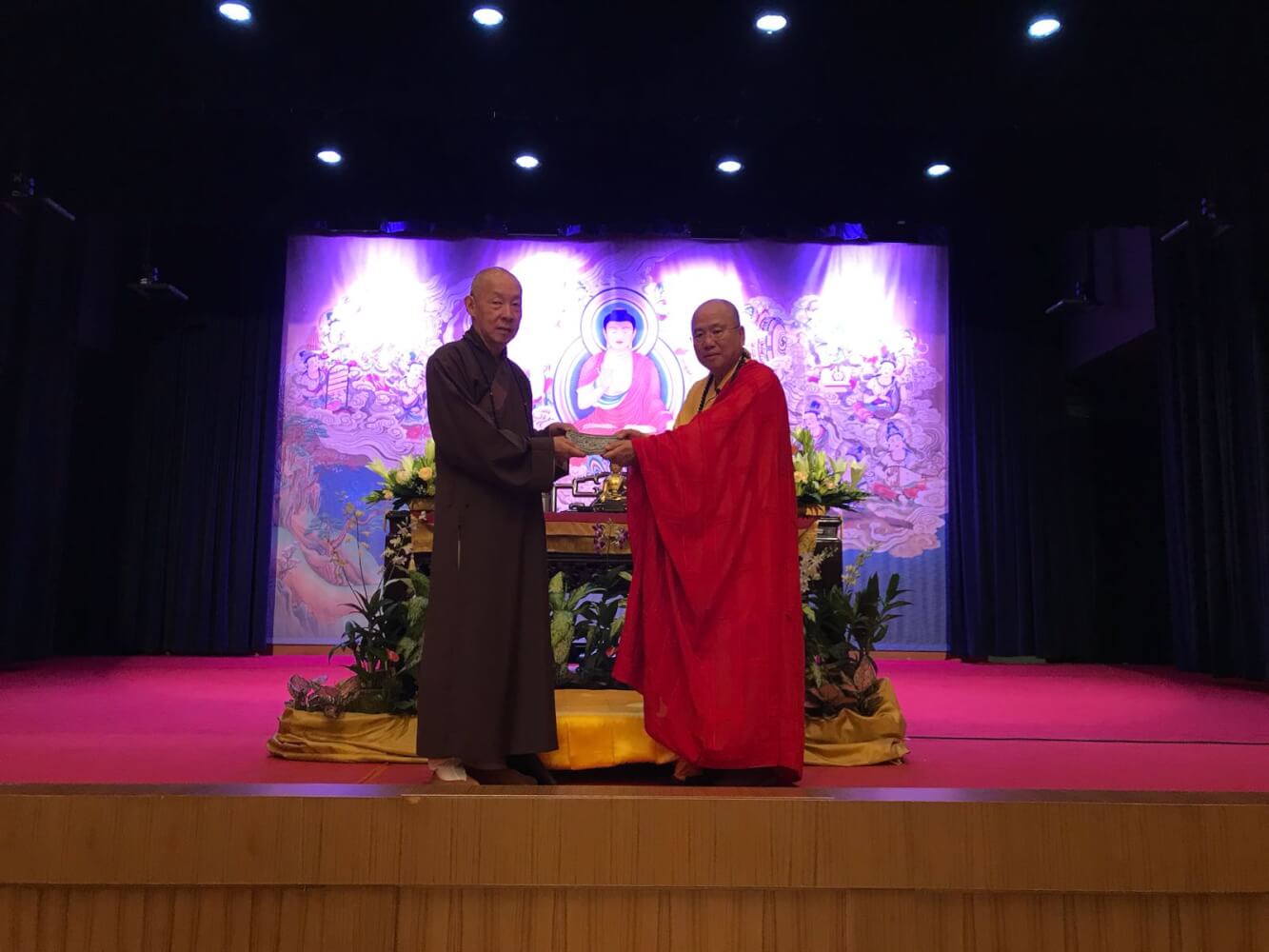 The Buddha of Medicine Welfare Society was founded by Venerable Neng Du with the aim to practise the Buddha’s teachings through supporting education and charity as well as organizing cultural and recreational activities. Tse Tho Aum Buddhist Temple is the largest nunnery in Singapore.

Three years ago, these three sponsoring organizations began to invite Venerable Guan Cheng to deliver Dharma lectures in Singapore. They are very pleased now that the trip has happened, but “it’s over in just four days after a wait of three years” as they say, expressing their longing, appreciation and joy.